A team of scientists in Australia and the United States, led by Associate Professor Miroslav Filipovic from the University of Western Sydney, have discovered a new class of object which they call “Super Planetary Nebulae.” They report their work in the journal Monthly Notices of the Royal Astronomical Society.

Planetary nebulae are shells of gas and dust expelled by stars near the end of their lives and are typically seen around stars comparable or smaller in size than the Sun.

The team surveyed the Magellanic Clouds, the two companion galaxies to the Milky Way, with radio telescopes of the Commonwealth Scientific and Industrial Research Organisation (CSIRO) Australia Telescope National Facility. They noticed that 15 radio objects in the Clouds match with well known planetary nebulae observed by optical telescopes.

The new class of objects are unusually strong radio sources. Whereas the existing population of planetary nebulae is found around small stars comparable in size to our Sun, the new population may be the long predicted class of similar shells around heavier stars.

Filipovic’s team argues that the detections of these new objects may help to solve the so called “missing mass problem” – the absence of planetary nebulae around central stars that were originally 1 to 8 times the mass of the Sun. Up to now most known planetary nebulae have central stars and surrounding nebulae with respectively only about 0.6 and 0.3 times the mass of the Sun but none have been detected around more massive stars. 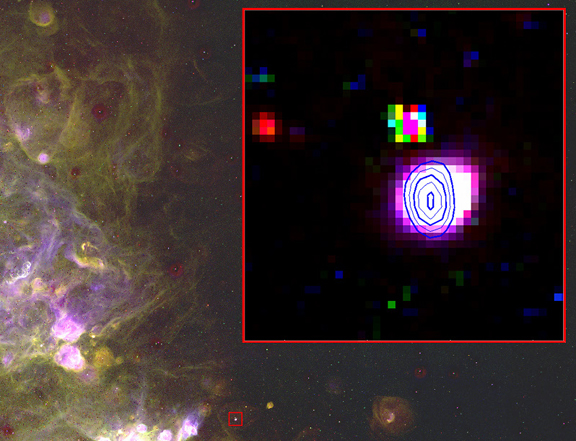 “This came as a shock to us”, says Filipovic, “as no one expected to detect these object at radio wavelengths and with the present generation of radio telescopes. We have been holding up our findings for some 3 years until we were 100% sure that they are indeed Planetary Nebulae”.

Some of the 15 newly discovered planetary nebulae in the Magellanic Clouds are 3 times more luminous then any of their Milky Way cousins. But to see them in greater detail astronomers will need the power of a coming radio telescope – the Square Kilometre Array planned for the deserts of Western Australia.

Accompanying images are available from http://staff.scm.uws.edu.au/~evan/PNE/

An optical image from the 0.6-m University of Michigan/CTIO Curtis Schmidt telescope of the brightest Radio Planetary Nebula in the Small Magellanic Cloud, JD 04. The inset box shows a portion of this image overlaid with radio contours from the Australia Telescope Compact Array. The planetary nebula is a glowing record of the final death throes of the star. (Optical images are courtesy of the Magellanic Cloud Emission Line Survey (MCELS) team).

The MNRAS paper is available as an Early View article from http://www3.interscience.wiley.com/journal/122542603/abstract

The Royal Astronomical Society (RAS), founded in 1820, encourages and promotes the study of astronomy, solar-system science, geophysics and closely related branches of science. The RAS organizes scientific meetings, publishes international research and review journals, recognizes outstanding achievements by the award of medals and prizes, maintains an extensive library, supports education through grants and outreach activities and represents UK astronomy nationally and internationally. Its more than 3000 members (Fellows), a third based overseas, include scientific researchers in universities, observatories and laboratories as well as historians of astronomy and others.