By SpaceRef Editor
December 19, 2002
Filed under astrogeology, University of Maryland, US

COLLEGE PARK, Md. — A University of Maryland-led team of scientists has discovered that diamonds can be natural time capsules, preserving information about the cycling of sulfur between Earth’s crust, atmosphere, and mantle some 3 billion years ago.

The findings are the latest demonstration by the team that some of Earth’s oldest rocks contain “isotopic signatures” — distinctive forms of elements like sulfur and oxygen that can reveal information about many previously unknowable aspects of Earth’s early history, such as the evolution of the atmosphere and the origin of early sulfur-metabolizing life.

According to the researchers, that cycle began some three billion years ago when sulfur dioxide and hydrogen sulfide gases were spewed into the atmosphere by an ancient volcano. The sulfur-bearing gases in the early atmosphere reacted with ultraviolet light to produce the signature sulfur isotope in aerosols that floated back to the Earth’s surface and were incorporated in ancient sedimentary rocks as sulfides. The tectonic plate containing this sedimentary rock eventually moved downward beneath another plate into the underlying mantle through a process scientists call subduction. When diamonds formed in the mantle, the sulfides with their signature sulfur isotopes were trapped inside. These processes all happened during the Archean period. Later, the diamonds were brought to Earth’s surface by volcanic processes and eventually mined.

“These findings have the potential to vastly increase our knowledge of Earth’s early history,” said Farquhar an assistant professor in the University of Maryland’s Earth Systems Science Interdisciplinary Center and the department of geology. “This study conclusively demonstrates that distinctive isotopic signatures created in the Earth’s early atmosphere can be found in ancient rocks from the Earth’s surface, and that this signature also can be transported deep into the Earth’s mantle. These isotopic signatures are nearly perfect tracers for the cycling of these elements between the earth’s atmosphere, its surface, and its mantle.”

According to Bos Wing, one of Farquhar’s post-doctoral researchers and a co-author of the study, the presence of atmospheric sulfur in the mantle may cause scientists to revise their views about the nature of early Earth’s sulfur reservoirs. “We now think there is a missing reservoir for sulfur that once cycled through the atmosphere of ancient Earth. Further research might reveal that this missing reservoir resides deep in the Earth’s mantle. Such a finding could, in turn, provide important insights into large-scale geophysical processes that have helped shape the evolution of Earth,” Wing said.
Sulfur commonly exists as a combination of several forms (isotopes) of the element. A few years ago, Farquhar discovered that the photochemistry of Earth’s early atmosphere produced sulfur that had a slightly different ratio for three of these isotopes. Finding sulfur with this ratio of isotopes in diamond or other ancient rocks thus indicates that the sulfur was once in the atmosphere of ancient Earth.
For the current study, bits of sulfide found in 12 diamonds were analyzed at the W.M. Keck Foundation Center for Isotope Geochemistry at UCLA using an ion microprobe. This device shoots highly focused beams of cesium ions at polished sulfide bits, no bigger than the thickness of a human hair, that have been removed from the diamonds. The ion beam punches a tiny hole into the sulfide, vaporizing a minute amount (less than a billionth of a gram). The probe device then performs mass analysis of the vaporized material to see if the signature isotopic ratio is present. 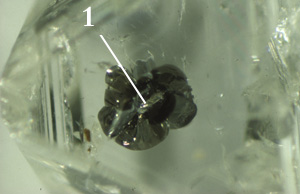 “Our instrument, which is about 10 years old, was the first of a new generation of large-scale ion microprobes,” said Kevin McKeegan, a professor in the UCLA department of Earth & Space Sciences and director of the center. “A recent upgrade of the device allows us to collect and analyze at once isotopes from multiple ion beams. This ability is essential for this study because it allows us to determine the sulfur isotope ratios with very high precision and accuracy.”

“These findings show diamonds are much more than jewels,” said Mark Thiemens, Dean of the Division of Physical Sciences at UCSD and another co-author of the paper. “They are valuable crystals through which geologists and atmospheric chemists can peer to gain insights into the earth’s atmosphere as it existed billions of years ago. The fact that you can make measurements of the atmosphere some two to three billion years ago by looking at the composition of sulfur in diamonds is remarkable and especially valuable for those studying the ancient earth’s geological processes.”

Two years ago, Thiemens and Farquhar, then a postdoctoral researcher working in Thiemens’ UCSD laboratory, published a paper in Science that applied different techniques to identify this sulfur signature in Earth’s earliest-known rocks. They revealed, for the first time, a record of early atmosphere chemistry that was recorded by sulfur in rocks. This gave scientists new insights into the evolution of oxygen, ozone and ultraviolet light in the planet’s early atmosphere — changes that coincided with the early evolution and expansion of terrestrial life.

Prior to their team’s discovery of the presence of signature isotopes in diamonds and other ancient rocks, ice cores were scientists’ only window on the Earth’s atmospheric past. However, isotopic signatures from gases trapped in polar ice provide information about atmospheric constituents and conditions for the only about the past 200,000 years.

Now, scientists around the world are using these sulfur isotopic signatures to look billions of years into the past to study Earth’s early atmosphere, the cycling of elements between early Earth’s crust, atmosphere, and mantle, the origin of early sulfur-metabolizing life, Earth’s earliest ice ages, the chemical layering of early oceans, and early plate tectonic-like processes.

The new technique can also be used to study other worlds. In a paper published two years ago in Nature, Farquhar and Thiemens applied it to Martian meteorites and determined that the abundant sulfur on the surface of Mars was due largely to the same sorts of chemical reactions in the Red Planet’s atmosphere that occurred on Earth.

The current study was financed by the National Science Foundation, NASA’s Astrobiology Institute and the American Chemical Society.