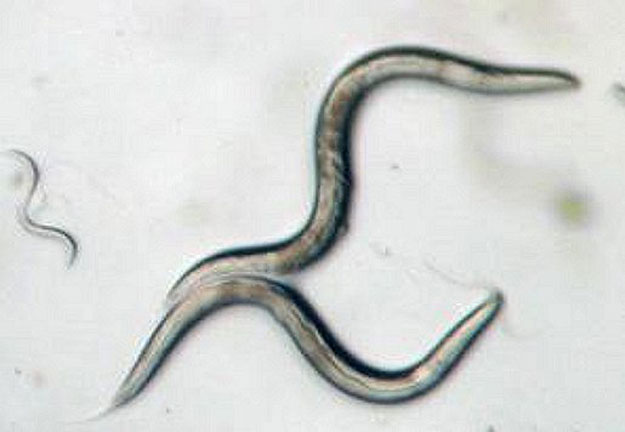 It is said that great things can come in small packages. In this case, one key to keeping astronauts healthy on long-duration space missions may be found in a tiny roundworm barely a millimeter long.

Two Japanese Aerospace Exploration Agency (JAXA) investigations on theInternational Space Station help researchers seek clues to physiological problems found in astronauts by studying Caenorhabditis elegans — a millimeter-long roundworm that, like the fruit fly, is widely used as a model for larger organisms. The results of the investigation could lead to new treatments for bone and muscle loss in humans living in space. Findings may also be beneficial to people on Earth suffering from muscle and bone diseases.

“Spaceflight-induced health changes, such as decreases in muscle and bone mass, are a major challenge facing our astronauts,” said Julie Robinson, NASA’s Chief Scientist for the International Space Station Program Office at NASA’s Johnson Space Center in Houston. “We investigate solutions on the station not only to keep astronauts healthy as the agency considers longer space exploration missions, but also to help those on Earth who have limited activity as a result of aging or illness.”

We rely on gravity to develop stronger muscles and bones. Athletes will lift weights — resisting the pull of gravity — to make their bodies even stronger. When gravity is greatly reduced — as in spaceflight — we don’t use those muscles to resist the force of gravity, and muscles and bones can slowly start to deteriorate. Even with assigned daily exercise, the bodies of astronauts in microgravity lose bone and muscle mass.

This is the same problem facing people who are on prolonged bed rest. The inactivity, even removing simple daily movement, can have a negative effect on the bones and muscles of the infirm or elderly. Patients on prolonged bed rest experience muscle atrophy, bone density loss and changes in metabolism, similar to the effects of long-duration spaceflight.

One investigation, scheduled for launch to the station on the SpaceX’s sixth space station resupply mission in 2015, is called Alterations of C. elegansmuscle fibers by microgravity (Nematode Muscle). It will look into the muscle fibers and cytoskeleton of the roundworm to clarify how those physiological systems alter in response to microgravity. Space station crew members will grow these worms in microgravity, as well as another batch in one-g using a centrifuge. This will simulate the force of gravity while the C. elegans remain physically in orbit, allowing a direct comparison of the effects of different gravity levels on organisms in space.

A different JAXA investigation currently on station is taking a much closer look at C. elegans by examining their DNA. The Epigenetics in spaceflown C. elegans (Epigenetics) study launched to the space station on the SpaceX CRS-5 resupply mission. It requires astronauts on the orbiting laboratory to grow four generations of the worm, with adults and larvae from each generation preserved at different points during their lifespan. The worms will return to Earth in the SpaceX Dragon spacecraft in January.

“The astronauts will cultivate multiple generations of the organism, so we can examine the organisms in different states of development,” said Atsushi Higashitani, principal investigator for both investigations with Tohoku University in Miyagi, Japan. “Our studies will help clarify how and why these changes to health take place in microgravity and determine if the adaptations to space are transmitted from one cell generation to another without changing the basic DNA of an organism. Then, we can investigate if those effects could be treated with different medicines or therapies.”

Worms grown in each investigation will be compared to similar batches grown in a laboratory in Japan. Understanding the molecular changes that take place in microgravity could help researchers develop treatments or therapies to counteract the physical changes associated with aging and extended bed rest, such as muscle atrophy or osteoporosis, and could help develop treatments or exercises for astronauts on long voyages.

This simple, tiny roundworm could lead to a cure for symptoms affecting millions of the aging and infirm population of Earth, and the astronauts orbiting it, potentially offering a solution to a major problem in an extremely small package.