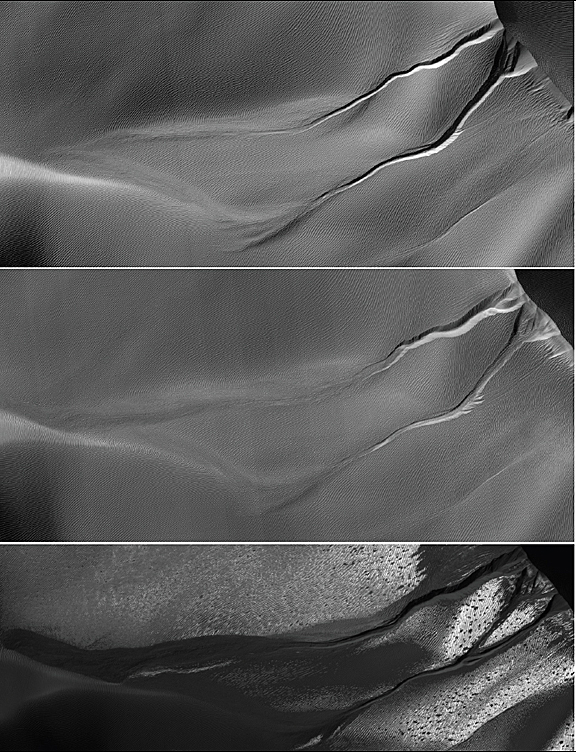 A growing bounty of images from NASA’s Mars Reconnaissance Orbiter reveals that the timing of new activity in one type of the enigmatic gullies on Mars implicates carbon-dioxide frost, rather than water, as the agent causing fresh flows of sand.

Researchers have tracked changes in gullies on faces of sand dunes in seven locations on southern Mars. The periods when changes occurred, as determined by comparisons of before-and-after images, overlapped in all cases with the known winter build-up of carbon-dioxide frost on the dunes. Before-and-after pairs that covered periods only in spring, summer and autumn showed no new activity in those seasons.

“Gullies that look like this on Earth are caused by flowing water, but Mars is a different planet with its own mysteries,” said Serina Diniega, lead author of a report on these findings in the November issue of the journal Geology. She analyzed these gullies while a graduate student at the University of Arizona, Tucson, and recently joined NASA’s Jet Propulsion Laboratory, Pasadena. “The timing we see points to carbon dioxide, and if the mechanism is linked to carbon-dioxide frost at these dune gullies, the same could be true for other gullies on Mars.”

Scientists have suggested various explanations for modern gullies on Mars since fresh-looking gullies were discovered in images from NASA’s Mars Global Surveyor in 2000. Some of the proposed mechanisms involve water, some carbon dioxide, and some neither.

Some fresh gullies are on sand dunes, commonly starting at a crest. Others are on rockier slopes, such as the inner walls of craters, sometimes starting partway down the slope.

Diniega and co-authors at the University of Arizona and Johns Hopkins University Applied Physics Laboratory, Laurel, Md., focused their study on dune gullies that are shaped like rockier slope gullies, with an alcove at the top, a channel or multiple channels in the middle, and an apron at the bottom. The 18 dune gullies in which the researchers observed new activity range in size from about 50 meters or yards long to more than 3 kilometers (2 miles) long.

“The alcove is a cutout at the top,” Diniega said. “Material being removed from there ends up in a fan-shaped apron below.”

Because new flows in these gullies apparently occur in winter, rather than at a time when any frozen water might be most likely to melt, the new report calls for studies of how carbon dioxide, rather than water, could be involved in the flows. Some carbon dioxide from the Martian atmosphere freezes on the ground during winter and sublimates back to gaseous form as spring approaches. The dunes studied are poleward of 40 degrees south latitude.

“One possibility is that a pile of carbon-dioxide frost accumulating on a dune gets thick enough to avalanche down and drag other material with it,” Diniega said. Other suggested mechanisms are that gas from sublimating frost could lubricate a flow of dry sand or erupt in puffs energetic enough to trigger slides.

At an increasing number of sites, before-and-after images have documented changes in Martian gullies. The new report uses images from the Mars Orbiter Camera on Mars Global Surveyor, which operated from 1997 to 2006, and from the High Resolution Science Imaging Experiment (HiRISE) camera and Context Camera on Mars Reconnaissance Orbiter, which has been examining Mars since 2006.

“The Mars Reconnaissance Orbiter is enabling valuable studies of seasonal changes in surface features on Mars,” said Sue Smrekar of NASA’s Jet Propulsion Laboratory, Pasadena, Calif., deputy project scientist for this orbiter. “One key to doing that has been the capability to point from side to side, so that priority targets can be checked more frequently than just when the spacecraft flies directly overhead. Another is the lengthening span of years covered by first Mars Global Surveyor and now this mission.”

JPL, a division of the California Institute of Technology in Pasadena, manages the Mars Reconnaissance Orbiter for NASA’s Science Mission Directorate in Washington. Lockheed Martin Space Systems, Denver, built the orbiter. The University of Arizona Lunar and Planetary Laboratory operates the HiRISE camera, which was built by Ball Aerospace & Technologies Corp., Boulder, Colo. Malin Space Science Systems, San Diego, built and operates the Context Camera and formerly did the same for the Mars Orbiter Camera. For more about the Mars Reconnaissance Orbiter, visit http://www.nasa.gov/mro. For more about HiRISE, visit http://hirise.jpl.nasa.gov.