A group of summer students making a long-shot astronomical gamble with
the
National Science Foundation’s (NSF)
Very Large Array
(VLA) have
found the first radio emission ever detected from a brown dwarf, an
enigmatic object that is neither a star nor a planet, but something
in between. Their surprising discovery is forcing experts to re-think
their theories about how brown dwarfs work. 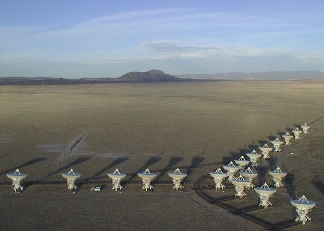 “Many astronomers are surprised at this discovery, because they didn’t
expect such strong radio emission from this object,” said Shri Kulkarni,
a Caltech professor who was on the team that first discovered a brown
dwarf in 1995, and advisor to one of the students.

“What is so cool is that this is research that probably nobody else
would have tried to do because of its low chance of success. That
made it ideal for summer students — we had almost nothing to lose,”
said Kate Becker, a student at Oberlin College in Ohio.

“The radio emission these students discovered coming from this brown
dwarf is 10,000 times stronger than anyone expected,” said Dale Frail,
an astronomer at the
National Radio Astronomy Observatory (NRAO) in

Socorro, NM. “This student project is going to open up a whole new area
of research for the VLA,” Frail added.

Berger, Hoffman, Momjian and Murphy are graduate students, and the rest were
participants in the NSF-funded

The 14 students spent last summer working with NRAO scientists
in Socorro. While each student had their own scientist-mentor, the
VLA summer students also traditionally receive some VLA observing
time for a collaborative project of their own. They sought ideas
for their project from the NRAO staff, and, when they asked Frail,
he suggested that they look at the latest research result from the
recently-launched Chandra X-ray satellite.

The students went to the

Chandra World Wide Web site, and found that
the satellite had detected an

X-ray flare from the brown dwarf
LP944-20. “We did some background reading, and realized that, based
on predictions, the brown dwarf would be unobservable with the VLA,
but we decided to try it anyway,” said Berger.

“Everybody we talked to said there was almost no chance that we’d
see anything at all,” said Becker. “They added, though, that it would
be really exciting if we did,” she said.

The students had been given three hours of VLA observing time for their
project. They used an hour and a half of it on the brown dwarf.

The day after their observation, the students gathered at the NRAO
Array Operations Center in Socorro to process their data and make
their images. Berger, who had experience processing VLA data, worked
alone in the same room as the other students, who were working together
on another computer. Berger finished first and was shocked at his
image.

“We all got excited,” said Berger, who then began breaking the
hour and a half’s worth of data up into smaller slices of time. This
showed that the brown dwarf’s radio emission had risen to a strong
peak, then weakened. That meant that the star had undergone a flare.
“Then we got real excited,” Berger said. They immediately sought
and received more observing time, ultimately capturing two more
flares.

“They got very lucky,” Frail said. “The thing flared during their
observation. Other astronomers had looked for radio emission from
brown dwarfs and not found any. This one flared at just the right
time,” Frail added.

“It was just an incredible fluke that we found it,” said Becker.

Brown dwarfs are too big to be planets but too small to be true stars,
as they have too little mass to trigger hydrogen fusion reactions at
their cores, the source of the energy output in larger stars. With roughly
15 to 80 times the mass of Jupiter, the largest planet in our Solar
System, brown dwarfs had long been thought to exist. Actually finding
them, however, proved difficult. After decades of searching, astronomers

found the first brown dwarf in 1995, and a few dozen now are known.

The strong radio emission was unexpected because brown dwarfs, according
to conventional theories, are not supposed to have magnetic fields
strong enough to generate the radio emission. “The presumed internal
structure of a brown dwarf will not permit a strong enough magnetic
field,” said Frail. “It looks like we’re going to have to re-examine
how we believe brown dwarfs work,” he said.

“The mere fact that they detected radio emission is remarkable,” said
Tim Bastian, an astronomer at the NRAO in Charlottesville, Virginia,
who added that this object “will likely have something to teach us.”

“We’re going to have to study this and other brown dwarfs more extensively
with the VLA to answer the questions raised by our summer students’
discovery,” Frail said.