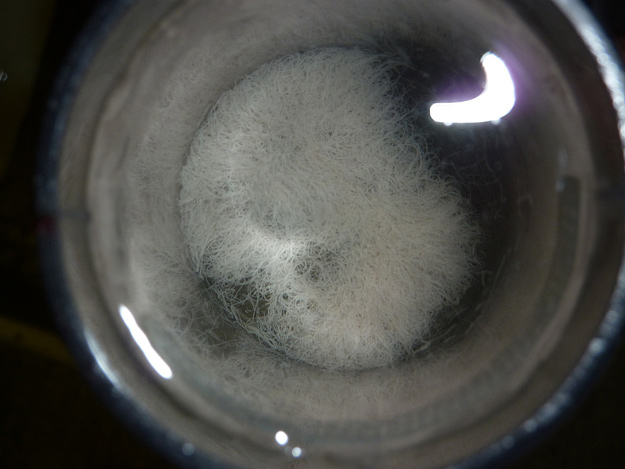 Image: The white filaments are sulfur bacteria (Beggiatioa) indicating the presence of sulfide.

Methane is formed under the absence of oxygen by natural biological and physical processes, e.g. in the sea floor. It is a much more powerful greenhouse gas than carbon dioxide. Thanks to the activity of microorganisms this gas is inactivated before it reaches the atmosphere and unfolds its harmful effects on Earth’s climate. Researchers from Bremen have now proven that these microorganisms are quite picky about their diet.

All life on Earth is based on carbon and its compounds. Cell components of all creatures contain carbon. The cell can take up this basic structural element via organic matter or builds up its own organic matter from scratch, i.e. carbon dioxide. Researchers termed the first type of cells heterotrophs and the latter autotrophs. All plants, many bacteria and archaea are autotrophs, whereas all animals, including humans, are heterotrophs. The autotrophs form the basis for the life of the heterotrophs and all higher life by taking up inorganic carbon to form organic material.

To keep the cellular systems running all cells need fuel. Methane can be such a fuel. When studying the methane consuming microbes discovered by Bremen scientists more than ten years ago, it was assumed that they take the methane for filling up their energy tanks and use it as a carbon source, i.e., they were thought to be heterotrophs.

Now scientists from MARUM and the Max Planck Institute for Marine Microbiology have shown that this is surprisingly not the case: the methane derived carbon is not used as a carbon source. “Our growth studies clearly show that the labelled carbon in the methane never showed up in the cell material, but experiments with labelled carbon from carbon dioxide did. It was quite surprising,” says author Matthias Kellermann. The archaea in the consortia behave as expected for chemoautotrophs. “Archaea and the sulphate reducing bacteria are living closely together in consortia, which grow extremely slowly. And it was only in the newly synthesised cell materia that we could find the answer for the question from where the carbon originates,” adds Kai-Uwe Hinrichs, leader of the organic geochemistry group at MARUM.

Co-author Gunter Wegener from the Max Planck Institute concludes: “With our new knowledge we can optimise our studies about the inactivation of methane in nature. Our surprising results tell us that we still know very few details of this globally important process.”

Samples were retrieved from the Guaymas Basin on the West coast of Mexico from a depth of more the 2000 metres using the US diving submersible Alvin.