An international team of astronomers is announcing today that they have
identified the probable surviving companion star to a titanic supernova explosion witnessed in the year 1572 by the great Danish astronomer Tycho Brahe and other astronomers of that era.

The results of this research, led by Pilar
Ruiz-Lapuente of the University of Barcelona,
Spain, are published in the Oct. 28 British
science journal Nature. “There was no previous
evidence pointing to any specific kind of
companion star out of the many that had been
proposed. Here we have identified a clear
path: the feeding star is similar to our sun,
but slightly older,‰ Ruiz-Lapuente says. „The
high speed of the star called our attention to
it,” she added. 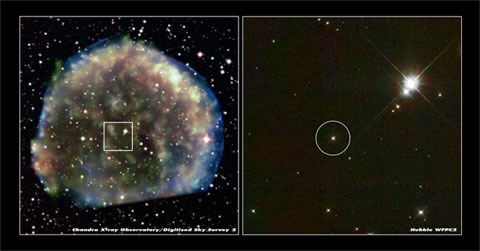 Type Ia supernovae are used to measure the
history of the expansion rate of the Universe
and so are fundamental in helping astronomers
understand the behaviour of dark energy, an
unknown force that is accelerating the
expansion of the universe. Finding evidence to
confirm the theory as to how Type Ia
supernovae explode is critical to assuring
astronomers that the objects can be better
understood as reliable calibrators of the
expansion of space.

The identification of the surviving member of
the stellar duo reads like a crime scene
investigation. Even though today’s astronomers
arrived at the scene of the disaster 432 years
too late, they were able nab one of the
perpetrators rushing away from the location of
the explosion (which is now enveloped in a
vast bubble of hot gas called Tycho’s
Supernova Remnant). The runaway star and its
surroundings have been studied with a variety
of telescopes for the past seven years. The
NASA/ESA Hubble Space Telescope played a key
role in the process by measuring the star’s
motion against the sky background precisely.
The suspect star is breaking the speed limit
for that particular region of the Milky Way
Galaxy by moving three times faster than the
surrounding stars. When the system was
disrupted by the white dwarf’s explosion, the
companion star went hurtling off into space,
like a stone thrown by a sling, retaining the
velocity of its orbital motion.

This is purely circumstantial evidence that
the speeding star is the perpetrator because
there are alternative explanations to its
suspicious behaviour. It could be falling into
the region from the galactic halo that
surrounds the Milky Way’s disk at a high
velocity. But spectra obtained with the 4.2-
meter William Herschel Telescope in La Palma
and the 10-meter W. M. Keck telescopes in
Hawaii show that the suspect has the high
heavy-element content typical of stars that
dwell in the Milky Way‚s disk, not the halo.
The star found by the Ruiz-Lapuente team is an
aging version of our own Sun. The star has
begun to expand in diameter as it progresses
toward a red-giant phase (the end stage of a
Sun-like star’s lifetime). The star turns out
to fit the profile of the perpetrator in one
of the proposed supernova conjectures. In Type
Ia supernova binary systems, the more massive
star of the pair will age faster and
eventually becomes a white dwarf star. When
the slower-evolving companion star
subsequently ages to the point where it begins
to balloon in size, it spills hydrogen onto
the dwarf. The hydrogen accumulates, gradually
fusing into heavier elements until it reaches
a critical and precise mass threshold, called
the Chandrasekhar limit, where it explodes as
a titanic nuclear fusion bomb. The energy
output of this explosion is so well known that
it can be used as a standard candle for
measuring vast astronomical distances. (An
astronomical “standard candle” is any type of
luminous object whose intrinsic power is so
accurately determined that it can be used to
make distance measurements based on the rate
the light dims over astronomical distances).

“Among the various systems containing white
dwarfs that receive material from a solar-mass
companion, some are believed to be viable
progenitors of Type Ia supernovae, on
theoretical grounds. A system called U Scorpii
has a white dwarf and a star similar to the
one found here. These results would confirm
that such binaries will end up in an explosion
like the one observed by Tycho Brahe, but that
would occur several hundreds of thousands of
years from now,” says Ruiz-Lapuente.

An alternative theory of Type Ia supernovae is
that two white dwarfs orbit each other,
gradually losing energy through the emission
of gravitational radiation (gravity waves). As
they lose energy, they spiral in toward each
other and eventually merge, resulting in a
white dwarf whose mass reaches the
Chandrasekhar limit, and explodes. “Tycho’s
supernova does not appear to have been
produced by this mechanism, since a probable
surviving companion has been found,” says Alex
Filippenko of the University of California at
Berkeley, a co-author on this research. He
says that, nevertheless, it is still possible
there are two different evolutionary paths to
Type Ia supernovae.

On November 11, 1572, Tycho Brahe noticed a
star in the constellation Cassiopeia that was
as bright as the planet Jupiter (which was in
the night sky in Pisces). No such star had
ever been observed at this location before. It
soon equalled Venus in brightness (which was
at -4.5 magnitude in the predawn sky). For
about two weeks the star could be seen in
daylight. At the end of November it began to
fade and change colour, from bright white to
yellow and orange to faint reddish light,
finally fading away from visibility in March
1574, having been visible to the naked eye for
about 16 months. Tycho‚s meticulous record of
the brightening and dimming of the supernova
now allows astronomers to identify its “light
signature” as that of a Type Ia supernova.

Tycho Brahe’s supernova was very important in
that it helped 16th-century astronomers
abandon the idea of the immutability of the
heavens. At the present time, Type Ia
supernovae remain key players in the newest
cosmological discoveries. To learn more about
them and their explosion mechanism, and to
make them even more useful as cosmological
probes, a current Hubble Space Telescope
project led by Filippenko is studying a sample
of supernovae in other galaxies at the very
time they explode.