By SpaceRef Editor
May 30, 2012
Filed under Hubble Space Telescope, Space Frontier Foundation, US 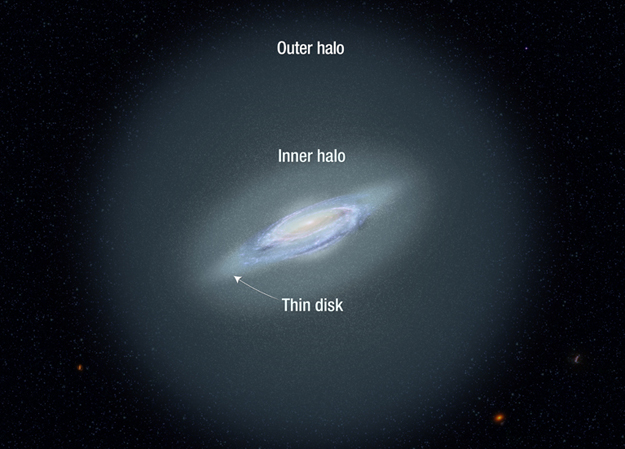 Unfortunately, stars don’t have birth certificates. So, astronomers have a tough time figuring out their ages. Knowing a star’s age is critical for understanding how our Milky Way galaxy built itself up over billions of years from smaller galaxies.

Jason Kalirai of the Space Telescope Science Institute and The Johns Hopkins University’s Center for Astrophysical Sciences, both in Baltimore, Md., has found the next best thing to a star’s birth certificate. Using a new technique, Kalirai probed the burned-out relics of Sun-like stars, called white dwarfs, in the inner region of our Milky Way galaxy’s halo. The halo is a spherical cloud of stars surrounding our galaxy’s disk.

Those stars, his study reveals, are 11.5 billion years old, younger than the first generation of Milky Way stars. They formed more than 2 billion years after the birth of the universe 13.7 billion years ago. Previous age estimates, based on analyzing normal stars in the inner halo, ranged from 10 billion to 14 billion years.

Kalirai’s study reinforces the emerging view that our galaxy’s halo is composed of a layer-cake structure that formed in stages over billions of years.

“One of the biggest questions in astronomy is, when did the different parts of the Milky Way form?” Kalirai said. “Sun-like stars live for billions of years and are bright, so they are excellent tracers, offering clues to how our galaxy evolved over time. However, the biggest hindrance we have in inferring galactic formation processes in the Milky Way is our inability to measure accurate ages of Sun-like stars. In this study, I chose a different path: I studied stars at the end of their lives to determine their masses and then connected those masses to the ages of their progenitors. Given the nature of these dead stars, their masses are easier to measure than Sun-like stars.”

Kalirai targeted white dwarfs in the galaxy’s halo because those stars are believed to be among the galaxy’s first homesteaders. Some of them are almost as old as the universe itself. These ancient stars provide a fossil record of our Milky Way’s infancy, possessing information about our galaxy’s birth and growth. “The Milky Way’s halo represents the premier hunting ground in which to unravel the archaeology of when and how the galaxy’s assembly processes occurred,” Kalirai explained.

White dwarfs divulge their properties so freely because they have a distinct spectral signature. Kalirai analyzed their signatures using archival spectroscopic data from the European Southern Observatory’s Very Large Telescope at the Paranal Observatory in Chile. The spectroscopic data are part of the SN Ia Progenitor Survey (SPY), a census of white dwarf stars in the Milky Way. Spectroscopy divides light into its constituent colors, yielding information about a star’s characteristics, including its mass and temperature. In his study, Kalirai first analyzed the spectra of several newly minted white dwarfs in the galaxy’s inner halo to measure their masses. “The hottest white dwarfs are the descendants of Sun-like stars that have just extinguished their hydrogen fuel,” he explained. “The masses of these white dwarfs are proportional to the masses of their progenitors, and we can use that mass to establish the age of the parent stars.”

To measure the halo’s age, Kalirai compared the masses of the halo stars with those of six newly formed white dwarfs in the ancient globular star cluster M4. Fortunately, the cluster is one of Hubble’s favorite targets, and astronomers have a reliable age for when it formed, 12.5 billion years ago. Kalirai found these dead cluster stars in archival visible-light images of nearly 2,000 white dwarfs taken by the Advanced Camera for Surveys aboard NASA’s Hubble Space Telescope.

He applied the same techniques that he used on the halo white dwarfs to these cluster white dwarfs. The spectroscopic observations for these stellar remnants came from the W.M. Keck Observatory in Hawaii. His measurements revealed that the halo white dwarfs are heavier than those in M4, indicating the progenitor stars that are evolving into white dwarfs today are also heavier. Therefore, these stars are younger than the M4 stars. More massive stars consume their hydrogen fuel at a faster rate and therefore end their lives more quickly than lighter-weight stars.

Although Kalirai’s result is based on a small sample of stars, it does support recent work proposing that the halo is composed of two different populations of stars.

According to the research, the Milky Way’s construction schedule began with the oldest globular star clusters and dwarf galaxies, which formed a few hundred million years after the big bang, settling into what is now the galaxy’s halo. These populations merged over billions of years to form the structure of our Milky Way. Stars in the inner halo were born during the assembly process. Over time, the Milky Way gobbled up older dwarf galaxies that formed less than 2 billion years after the big bang. Their ancient stars settled into the outskirts of the halo, creating the outer halo.

“In the previous work, the inner population was shown to be different from the outer population in terms of the velocities and chemical abundances of the stars,” Kalirai said. “There were no constraints, however, on whether there was an age difference between the two populations. Now, our work suggests an age for the inner halo stars.

“We know some of the remote globular clusters in the outer halo are much older than the inner halo stars, perhaps around 13.5 billion years old,” Kalirai contined. “So, our prediction is that if you find white dwarfs in the outer halo, they would have formed from older generations of Sun-like stars. The present day masses of stars in the generation that are now forming white dwarfs would be lower, and therefore the white dwarf masses — which we can measure — will also be lower.”

Kalirai hopes to apply his new technique on more halo white dwarfs in his quest to help uncover our galaxy’s history.

“One of the interesting questions about the inner halo stars is, did all of them form at the same time, or did they form over a span of time?” Kalirai said. “A sample of 20 to 30 white dwarfs would allow us to see if the inferred ages from the white dwarf masses span from 11 billion to 13 billion years. That could tell us that the accretion events that helped build up the Milky Way kept happening for several billion years, as opposed to all predominantly happening at one epoch.”