By SpaceRef Editor
February 28, 2001
Filed under NASA HQ, US

I am pleased to have the opportunity to speak today concerning the topic of space solar power and NASA’s recent open session discussions concerning the advancement of this area of technology with the National Research Council. During the past 5 years, NASA has examined the viability of large-scale space solar power (SSP) systems through a series of studies and preliminary technology research activities.

Very briefly, our results and findings to date can be summarized as follows:

In response to the request of Senator Graham in his invitation letter to participate in this roundtable, I would like focus my additional remarks on summarizing the strategic research and technology roadmap that was discussed with the NRC.

An important planned product of the NASA’s recent efforts has been an update of the strategic research and technology (R&T) road maps for space solar power that were originally formulated for SSP in November 1998. The following is a brief synopsis of that updated strategic R&T road map for Space Solar Power, as presented to the NRC. (See Figure 1).

By the 2006-2007 time frame, advances in a number of technology areas important to abundant and affordable power in space could be achieved. During this timeframe, early demonstrations of wireless power transmission could be implemented. For example, a 100-kilometer range power relay demonstration could test wireless power transmission using a reflector suspended from an airship at 20-km altitude. Similarly, initial technology flight experiments could be conducted, for example at the International Space Station, to test revolutionary solar power generation and management technologies.

In addition, the technologies for an initial in-space SSP platform bus in the 100-kilowatt power class could be demonstrated at the system breadboard level. Such a demonstration would be consistent with large-scale geostationary communications satellites, solar electric power and propulsion systems for space science and near-Earth exploration applications, and continuing commercial development of low-Earth orbit, including demonstration of wireless power transmission from central power stations to other spacecraft. Also, during this time frame, the technology could be demonstrated for a planetary or Lunar surface “wireless power grid” in the 5-20-kilowattpower class. This prospective demonstration would be consistent with exploration and/or initial commercial development in these locations.

By the 2011-2012 time frame, these initial advances could be leveraged to demonstrate the technology for a 1-megawatt class SSP platform bus, including validation of space-to-space and space-to-surface wireless power transmission. As noted previously, once at a target destination such a system could also serve as a “mini-SPS”, beaming power from space to provide non-nuclear energy to planetary or lunar surface outposts and operations. Substantial demonstrations of power beaming from ground-to-space might also be achievable during the next decade (for example, to transmit power to an electric orbital transfer vehicle operating in Earth orbit).

Within the next 15-20 years, the technologies and breadboard systems for an intermediate-scale in-space SSP platform in the 10-megawatt power class could be developed and demonstrated. This class of concept is consistent with ambitious applications in space exploration, such as interplanetary transportation systems, or in space development, such as sub-scale SPS pilot plants or full-scale in-space power plants. If successfully developed, these technologies could find broad applicability on Earth and in space. For example, ultra-high efficiency solar arrays and energy storage systems (developed in cooperation with the Department of Energy and other Agencies) would find diverse uses terrestrially and in commercial and scientific space applications. Both power beaming from space-to-ground for planetary or lunar surface power (described above) as well as power relay concepts – beaming power from Earth-to-space-to-Earth – could be demonstrated in this timeframe.

By the 2025-2035 time frame, the technologies needed for a full-scale in-space SSP platform producing 1-2 gigawatts of power could be demonstrated at the system prototype level. This concept is consistent with an initial solar power satellite “pilot plant” that could demonstrate base load power transmission for terrestrial markets. This time frame is consistent with current plans for the development of very-low-cost Earth-to-orbit space transportation systems (e.g., in the $100-$200 per kilogram recurring cost range).

Ultimately, in the post-2050 time frame, very-large-scale, in-space SSP platforms in the greater than 10-gigawatt power class could become viable. Such systems might find application in providing very-large-scale power to terrestrial markets, for the industrial development of space resources, or in powering robotic probes to near-interstellar space during the latter portion of this century.

Overall, the updated strategic R&T road map for SSP suggests that significant advances could be achieved during the next several decades – with important applications in space science, exploration, commercial space and on Earth. Major technical, regulatory and conceptual hurdles continue to exist, nevertheless. Systematically, the technologies that might enable future large-scale SSP systems are sufficiently challenging that they will require several decades to mature. However, this is approximately the same time frame during which new space transportation systems, commercial space markets, etc. could advance. The question of ultimate SPS economics remains open, with key issues now appearing to revolve around the prospects for achieving “terrestrial-class” production costs for large space systems.

Technical hurdles have been better explored and characterized as a result of NASA’s recent efforts, and important progress has been achieved. Nevertheless, significant and highly challenging research and technology development must be conducted successfully across a wide range of areas in order for affordable and abundant space solar power to be realized.

No comments can be made at this time regarding NASA FY 2002 budget. However, the research and development cost of the strategic research and technology road map for space solar power outlined above would be substantial. A preliminary estimate was formulated and presented for review by the NRC. The results of that review are still pending. 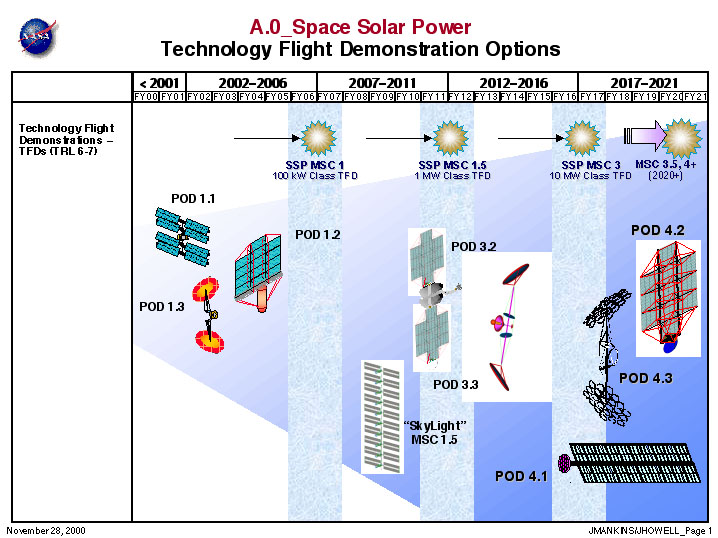