Star Explosion Leaves Behind a Rose 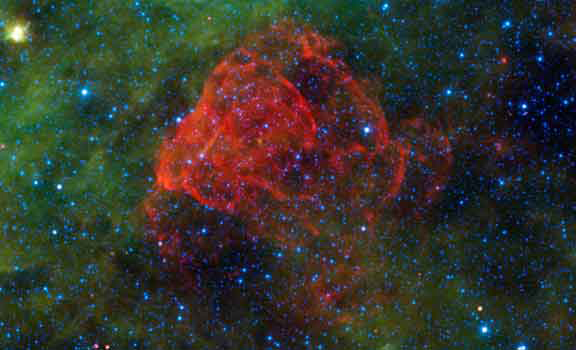 About 3,700 years ago people on Earth would have seen a brand-new bright star in the sky. As it slowly dimmed out of sight, it was eventually forgotten, until modern astronomers found its remains — called Puppis A. Full image and caption

Puppis A (pronounced PUP-pis) was formed when a massive star ended its life in a supernova, the most brilliant and powerful form of an explosion in the known universe. The expanding shock waves from that explosion are heating up the dust and gas clouds surrounding the supernova, causing them to glow and appear red in this infrared view. While much of the material from that original star was violently thrown out into space, some of it remained in an incredibly dense object called a neutron star. This particular neutron star (too faint to be seen in this image) is moving inexplicably fast: over 3 million miles per hour! Astronomers are perplexed over its absurd speed, and have nicknamed the object the “Cosmic Cannonball.”

Some of the green-colored gas and dust in the image is from yet another ancient supernova — the Vela supernova remnant. That explosion happened around 12,000 years ago and was four times closer to us than Puppis A.

The colors in this image represent different wavelengths of infrared light that humans can’t see with their eyes.

JPL manages and operates the Wide-field Infrared Survey Explorer for NASA’s Science Mission Directorate, Washington. The principal investigator, Edward Wright, is at UCLA. The mission was competitively selected under NASA’s Explorers Program managed by the Goddard Space Flight Center, Greenbelt, Md. The science instrument was built by the Space Dynamics Laboratory, Logan, Utah, and the spacecraft was built by Ball Aerospace & Technologies Corp., Boulder, Colo. Science operations and data processing take place at the Infrared Processing and Analysis Center at the California Institute of Technology in Pasadena. Caltech manages JPL for NASA.