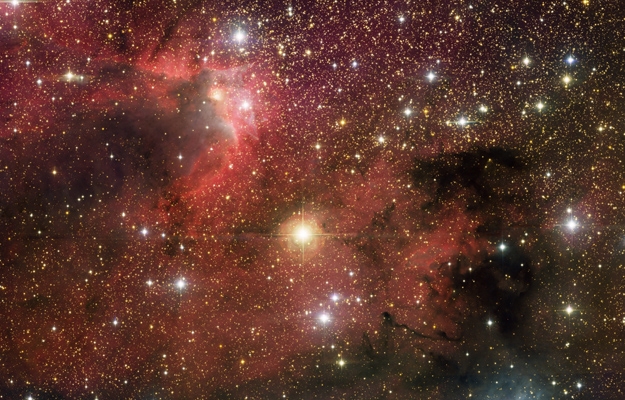 Watching starbirth isn’t easy: tens of millions of years are needed to form a star like our Sun. Much like archeologists who reconstruct ancient cities from shards of debris strewn over time, astronomers must reconstruct the birth process of stars indirectly, by observing stars in different stages of the process and inferring the changes that take place. Studies show that half of the common stars, including our Sun, formed in massive clusters, rich with young stars, from which they eventually escape. As part of his PhD thesis work, Thomas Allen, University of Toledo, has been observing such a region where stars are forming.

Named Cep OB3b, this cluster is located in the northern constellation of Cepheus, and is similar in some ways to the famous cluster found in the Orion Nebula. But unlike the Orion Nebula, there is relatively little dust and gas obscuring our view of Cep OB3b. Its massive, hot stars have blown out cavities in the gaseous cloud with their intense ultraviolet radiation which mercilessly destroys everything in its path. Cep OB3b may show us what the Orion Nebula Cluster will look like in the future.

In a recently published paper [http://dx.doi.org/10.1088/0004-637X/750/2/125], Allen and an international team of astronomers from seven different universities and institutes (University of Toledo, University of Massachusetts, Amherst, University of Rochester, University of Exeter, Keele University, Harvard-Smithsonian Center for Astrophysics and Space Telescope Science Institute) have found that the total number of young stars in the cluster is as high as 3,000. Infrared observations of the stars from the NASA Spitzer satellite show about 1,000 stars that are surrounded by disks of gas and dust from which solar systems may form. As the stars age, the disks disappear as the dust and gas get converted into planets or are dispersed into space. As Allen says, “By studying nearby massive young clusters like Cep OB3b, we can gain a greater understanding of the environments out of which planets form.”

These observations pointed to a new mystery. Although the stars in Cep OB3b are thought to be about three million years old, in some parts of the cluster most of the stars had lost their disks, suggesting that the stars in those parts were older. This suggests that the cluster is surrounded by older stars, potential relics of previous clusters that have since expanded and dispersed. To search for evidence for these relic clusters, Allen used the Mosaic camera on the 0.9 meter telescope at Kitt Peak National Observatory to observe wide field images of CepOB3b. These images show hot gas and its interaction with the stars and permit the team to study a curious cavity in the gas for evidence of older, yet still juvenile, stars that have lost their disks of gas and dust. With these data, the team is searching for the previous generations of star formation in the region surrounding Cep OB3b, and piecing together the history of star formation in this magnificent region. When finished, this may tell us how previous generations may have influenced the current generation of stars and planets forming in Cep OB3b.

The picture accompanying this release was created by combining individual images observed through four different filters: blue, visual (cyan), near infrared (orange) and an emission line of hydrogen (red). Image processing was done by Dr. Travis Rector. The brightest yellow star near the center of the image is a foreground star, lying between us and the young cluster. The other bright stars are the massive young stars of the cluster that are heating the gas and dust in the cloud and blowing out cavities. Surrounding these massive cluster stars are thousands of smaller young stars that may be in the process of forming planetary systems.

Over the decades the telescopes at Kitt Peak National Observatory have been used to probe many questions of star formation. Some 40 years ago the same 0.9 meter telescope was used to study this cluster, but back then the camera attached to the telescope made use of far less sensitive photographic plates. Modern CCDs, familiar to everyone with a cell phone camera, have enabled astronomers to tease out the mysteries of how stars form with far more precision.