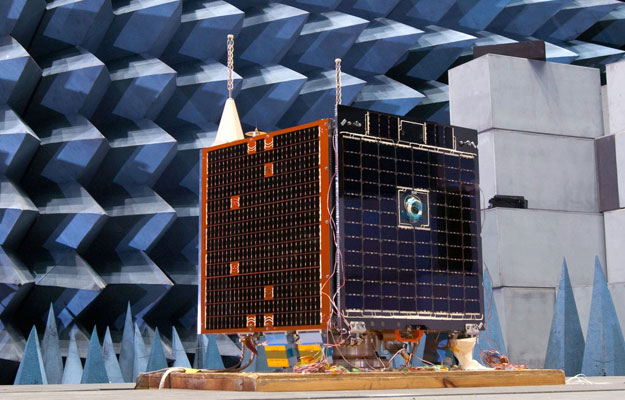 exactView-1 (previously known as ADS-1b) was built under contract for exactEarth and will become the fifth deployed satellite in exactEarth’s advanced vessel monitoring satellite constellation. COM DEV Canada acted as prime contractor and COM DEV Europe(UK) supplied the advanced AIS transceiver payload system for this mission. The satellite is based on SSTL’s off-the-shelf SSTL-100 platform, adapted for the mission with an additional deployable solar panel providing extra power for the COM DEV designed AIS receiver payload.

AIS is currently deployed on more than 80,000 vessels globally, however AIS base station receivers are mostly based on land and can only track ships moving up to 50 nautical miles off the coast. exactEarth is pioneering space-based AIS services that increases the range, enabling the monitoring of vessels throughout the World’s oceans. Operating from a polar orbit, exactView-1 will utilise high-speed S-band and C-band communications to frequently downlink information to ground stations in Svalbard, Norway, Guildford, UK and several other locations around the world. exactEarth will use a constellation of AIS satellites to provide near real time information about vessel locations, routes and traffic for commercial and governmental customers.

Having integrated the payload at its technical facility in Guildford, Surrey, SSTL is now acting as launch agent in collaboration with Commercial Space Technologies (CST) of Russia. The exactView-1 satellite is currently undergoing pre-launch testing in Baikonur. Once launched, SSTL will oversee a two-month in-orbit commissioning campaign from its UK ground station in collaboration with exactEarth and COM DEV engineers.

The 100kg exactView-1 will be launched alongside the Russian KANOPUS and BKA remote sensing satellites, which both incorporate SSTL platform avionics and software.

To follow the latest updates on the exactView-1 launch, go to:
http://www.sstl.co.uk/launches/exactView-1

Based in Guildford, UK, SSTL is owned by Astrium, an EADS company.
www.sstl.co.uk