By SpaceRef Editor
March 27, 2013
Filed under Commerce, Loral, US 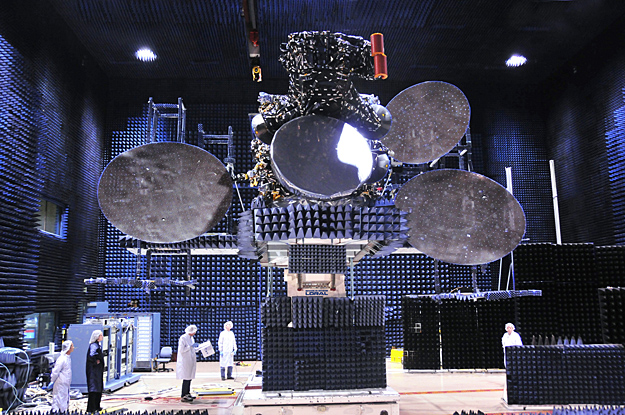 Space Systems/Loral (SSL), a leading provider of commercial satellites, today announced that the Satmex 8 satellite, designed and built for Satelites Mexicanos, S.A. de C.V. (Satmex), was launched yesterday and is successfully performing post-launch maneuvers according to plan. The satellite deployed its solar arrays on schedule following its launch aboard a Proton Breeze M launch vehicle provided by International Launch Services (ILS) from the Baikonur Space Center in Kazakhstan . The satellite will begin firing its main thruster later today in order to start maneuvering into geosynchronous orbit.

“SSL shares Satmex’s focus on quality service and the use of satellite communications for an interconnected world,” said John Celli , president of SSL. “We are pleased to see Satmex 8 performing on orbit where it joins Satmex 6, also built by SSL, which continues to provide reliable service over the Americas.”

Satmex 8 is a Fixed Satellite Services (FSS) spacecraft that will provide video content and distribution, broadband services, and cellular backhaul in North, South and Central America . It will also help people in remote areas with services for telemedicine, distance learning, and emergency communications. When the satellite completes in-orbit testing, it will replace Satmex 5 at 116.8 degrees West longitude.

“SSL has been an important contributor to our fleet expansion,” said Jesus Gutierrez , program manager and director of engineering of Satmex. “We would like to thank everyone at SSL, ILS, and Satmex who dedicated their time to this satellite and made this launch a success.”

Satmex 8 is based on the highly reliable SSL 1300 space-proven platform, which provides the flexibility to support a broad range of applications and technology advances. The satellite is designed to deliver service for 15 years or more. With this launch, there are 72 SSL-built satellites currently on orbit.

Satelites Mexicanos (“Satmex”) is a significant provider of fixed satellite services (“FSS”) in the Americas, coverage of more than 90% of the population of the region. As one of only two privately-managed FSS providers based in Latin America, Satmex (together with its predecessors) has designed, procured, launched and operated three generations of satellites over a 25 year period. Satmex’s current fleet is comprised of three satellites in highly attractive, contiguous orbital slots that enable its customers to effectively serve their entire coverage footprint utilizing a single satellite connection.

SSL, a subsidiary of MDA, has a long history of delivering reliable satellites and spacecraft systems for commercial and government customers around the world. As a leading provider of commercial satellites, the company works closely with satellite operators to provide spacecraft for a broad range of services including television and radio distribution, digital audio radio, broadband Internet, and mobile communications. Billions of people around the world depend on SSL satellites every day. For more information, visit www.ssloral.com.

MDA’s business is focused on markets and customers with strong repeat business potential. In addition, the Company conducts a significant amount of advanced technology development.

MDA’s well-established global customer base is served by more than 4,500 employees operating from 11 offices located in the United States , Canada , and internationally.