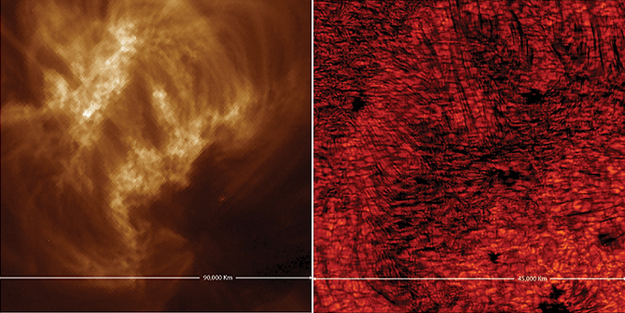 Left: An image of a magnetic loop complex as captured on July 22, 2011 by the Atmospheric Imaging Assembly on the Solar Dynamics Observatory. The image shows light in the 193 Angstrom wavelength. Credit: NASA/SDO/AIA Right: This covers the area of the sun roughly in the middle of that shown in the SDO image on the left, as captured by the New Space Telescope. Together the images were used to observe and analyze ultrafine loops of magnetized material in the sun’s atmosphere. Credit: NST

A key to understanding the dynamics of the sun and what causes the great solar explosions there relies on deciphering how material, heat and energy swirl across the sun’s surface and rise into the upper atmosphere, or corona. Tracking the constantly moving material requires state-of-the-art telescopes with the highest resolution possible. By combining images from NASA’s Solar Dynamics Observatory (SDO) and a new generation telescope called the New Solar Telescope (NST) at Big Bear Solar Observatory in Big Bear City, Calif. scientists have for the first time observed a new facet of the system: especially narrow loops of solar material scattered on the sun’s surface, which are connected to higher lying, wider loops. These ultrafine loops, and their wider cousins may also help with the quest to determine how temperatures rise throughout the corona.

“We’re used to seeing magnetic loops on the sun,” says Philip Goode of the New Jersey Institute of Technology in Newark, NJ, who was a co-author on a paper on these results in the Astrophysical Journal on May 1, 2012. “But we’ve never seen ones lying so low, that were so cold, or that were so narrow. These loops are 10 times narrower and at least 10 times cooler than the higher loops often seen by SDO.”

Goode and his colleagues, Wenda Cao and Haisheng Ji used the two telescopes to observe these loops in data from July 22, 2011. The combination of NST and SDO allowed the researchers to trace the flow of energy from the cooler ultrafine loops observed with NST to cospatial and cotemporal brightenings seen by SDO in the overlying million degree corona. In the NST observations, the loops show a nearly consistent width of what Goode says is a “surprisingly narrow diameter” of only about 60 miles across. The team aligned images from the NST, which can measure magnetic fields to high resolution, with the SDO images to find the magnetic footprint of these loops on the sun. The magnetic maps showed that the loops lined up with fine lanes on the sun that separate what’s known as granules – cells on the star’s surface that can be loosely understood as bubbles of boiling solar material that rise up from below. After the material, or plasma, rises up into the granules, it sweeps out to the sides, and flows back down these intergranular lanes. The lanes are consequently believed to contain concentrated magnetic fields, the perfect place for the origin of these newly spotted magnetic loops. The very position and shape of the ultrafine loops, therefore, help confirm models of the sun’s surface.

Goode and his colleagues did more than just categorize the size and shape of the loops, however. They also tracked the loops through time as they rose up into the sun’s corona, a process that may help solve a persistent question in solar physics, namely why the sun’s atmosphere, or corona is so hot.

Scientists in the early 1940s discovered that the sun’s atmosphere is some thousand times hotter than its surface. Determining just what processes heat those gases up to millions of degrees has been a key research area ever since.

“There have been many suggestions over the years as to what mechanism can make the atmosphere a thousand times hotter than the surface of the sun,” says Goode. “They basically come in two categories. The first is that there’s some kind of continuous magnetic energy adding heat. The second is that there’s an impulsive, intermittent movement that adds heat. And there are, of course, all kinds of variations and mixtures of each theme.”

In this case, the appearance of the ultrafine loops seems to be correlated to intense magnetic field collisions. The largest groups of loops also corresponded to solar phenomena called Type II spicules, which some theories postulate contribute to coronal heating.

“We observe an impulsive event at the sun’s surface, and this excites low-lying and higher-lying, wider loops almost simultaneously,” says Goode. “It’s just a correlation at this point, but for the first time we’ve observed something happen at the surface and we can track it up through heating of the corona. This doesn’t answer the question of whether it’s the only mechanism that heats the corona, but it certainly seems to be at least one mechanism.”

In addition to the value of having seen such fine structures for the first time, Goode and his colleagues believe this is a great example of how the NST can coordinate with other instruments, such as an upcoming NASA Explorer called the Interface Region Imaging Spectrograph or IRIS, due to launch no earlier than December 2012. IRIS will focus exclusively on the area of the sun’s atmosphere at the base of the corona, an area crucial for coronal heating. The NST’s capabilities will mesh nicely with this since it can measure magnetic fields in the same regions IRIS will be observing.

For more information about the IRIS mission, visit: http://science.nasa.gov/missions/iris/