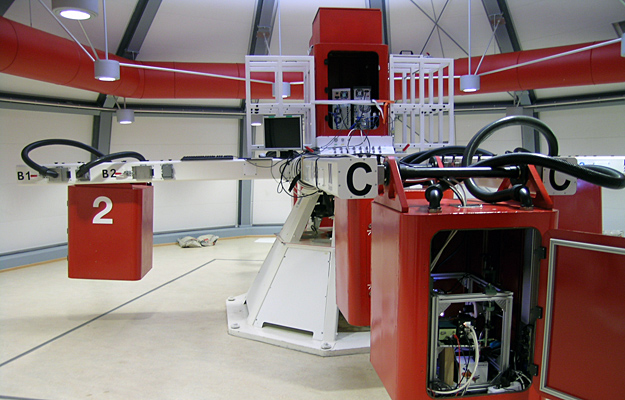 Four teams of university students have been chosen to develop and conduct hypergravity experiments during ESA’s fourth “Spin Your Thesis!” campaign.

The campaign will take place from 23 September to 4 October 2013 at the Large Diameter Centrifuge facility located at ESA’s European Space Research and Technology Centre (ESTEC) in Noordwijk, the Netherlands. Each week two teams will use the centrifuge equipment.

During the preparation of their experiments, the students will be supported by ESA’s Education Office and hypergravity experts. A member of the European Low Gravity Research Association (ELGRA) will also be on hand to provide advice and expertise in gravity-related research.

The selected teams and their experiments are the following:

GRAVARC TNG: The team is composed of 3 PhD students from Masaryk University in Brno (Czech Republic). The experiment will examine the behaviour of gliding arcs of plasma in noble gases under hypergravity conditions with the objective of improving our understanding of the physical phenomena involved. Studying electric discharges at different levels of gravity is important for safety in spaceflight, for the design of ion thrusters, and for the understanding of plasma-related processes in planetary atmospheres.

Hy-PHP: The team is composed of a PhD student and a Masters student from the Engineering Department of the University of Bergamo (Italy). The students intend to study the effect of different hypergravity levels on the thermal hydraulic behaviour of a closed-loop pulsating heat pipe. Their results could help with the preparation of pulsating heat pipe experiments on the International Space Station.

Osteo: The team is composed of two PhD students in Biorobotics from the Italian Institute of Technology and one undergraduate student in Bioengineering from the University of Pisa (Italy). They will investigate the combined effect of hypergravity and barium titanate nanoparticles on the proliferation and osteogenic (bone forming) differentiation of mesenchymal stem cells (which are a kind of connective tissue cell). Their findings could improve knowledge of the stimuli involved in bone-forming differentiation, as well as the design of new approaches to drug delivery.

Spin-Leidenfrost: The team is composed of two PhD students who study Physical Sciences at the University of Liege (Belgium). They will study the Leidenfrost effect under hypergravity conditions. When a droplet of water is dropped onto a hot plate (just above 100 degrees C), it takes a fraction of a second to evaporate. However, when the surface temperature is above a given threshold (the so-called Leidenfrost Point), the droplet levitates on its own vapour and takes several seconds, or even minutes, to evaporate. The team intends to study the effect of an increase in weight of the droplets on the Leidenfrost Point while under hypergravity conditions. They also plan to study geometrical aspects of heavy drops by analysing their shape.

The selection for Spin Your Thesis! 2013 was made by experts from ESA’s Education Office, ESA’s Technical Directorate and ELGRA.