By SpaceRef Editor
September 26, 2009
Filed under Commerce, SpaceX, US

Space Exploration Technologies (SpaceX) announces the successful demonstration of a proximity sensor, called DragonEye, on NASA’s STS-127 shuttle mission. DragonEye launched aboard the Space Shuttle Endeavour on July 15th, 2009, and was tested in proximity of the International Space Station (ISS) in preparation for future visits by SpaceX’s Dragon spacecraft.

With the help of NASA’s Commercial Crew and Cargo Program Office, DragonEye, a Laser Imaging Detection and Ranging (LIDAR) sensor, has undergone flight system trials aboard Space Shuttle Endeavour in preparation for guiding the Dragon spacecraft as it approaches the ISS. The DragonEye LIDAR system provides three-dimensional images based on the amount of time it takes for a single laser pulse from the sensor to the reach a target and bounce back, providing range and bearing information from the Dragon spacecraft to the ISS. 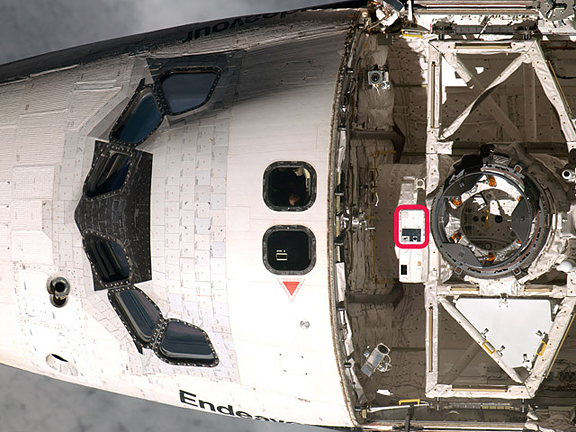 DragonEye will make its operational debut on the final flight of the Dragon spacecraft under NASA’s Commercial Orbital Transportation Services (COTS) program, where the spacecraft will demonstrate the ability to berth with the ISS.

Developed in just 10 months from concept to final hardware, DragonEye was delivered to NASA’s Kennedy Space Center on February 16th, 2009, for integration with the Space Shuttle Endeavour, successfully completing all of NASA’s payload safety milestones.

Using flight data gathered onboard Space Shuttle Endeavour, DragonEye was able to detect the ISS and track it through various approach and departure maneuvers. Upon Endeavour’s return, the DragonEye system was returned to SpaceX, where flight data from the sensor was retrieved and is currently under evaluation. 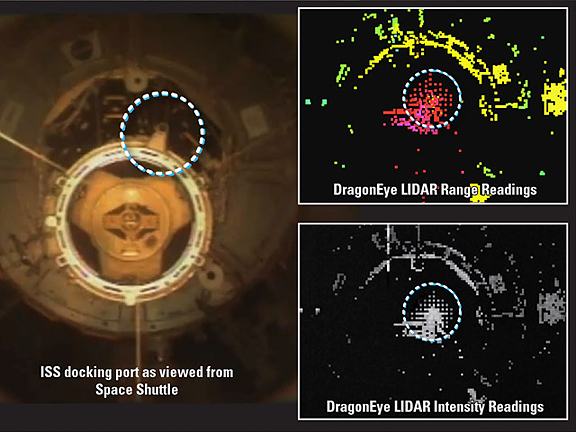 Images on right captured by the DragonEye LIDAR system during its recent flight aboard Space Shuttle Endeavour (ISS image courtesy NASA).
“The verification and functionality of SpaceX’s DragonEye are a testament to the unique government-commercial partnership created by NASA’s COTS program,” said Gwynne Shotwell, President, SpaceX. “SpaceX appreciates NASA’s support with DragonEye and is proud to be a part of a program that is shaping the future of American spaceflight.”

Together with SpaceX’s Falcon 9 launch vehicle, the Dragon spacecraft is under contract with NASA to provide cargo resupply to the ISS when the Space Shuttle retires. This contract includes 12 flights between 2010 and 2015, with a guaranteed minimum of 20,000 kg of pressurized and unpressurized cargo to be carried to the ISS. SpaceX is the only COTS contender that has the capability to return cargo to Earth. 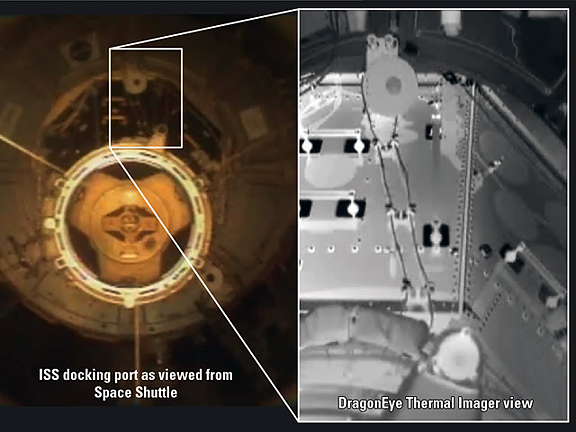 Image on the right captured by the DragonEye system during its recent flight aboard Space Shuttle Endeavour (ISS Image courtesy NASA).

SpaceX is developing a family of launch vehicles and spacecraft intended to increase the reliability and reduce the cost of both manned and unmanned space transportation, ultimately by a factor of ten. With the Falcon 1 and Falcon 9 vehicles, SpaceX offers highly reliable/cost-efficient launch capabilities for spacecraft insertion into any orbital altitude and inclination. Starting in 2010, SpaceX’s Dragon spacecraft will provide Earth-to-LEO transport of pressurized and unpressurized cargo, including resupply to the International Space Station (ISS).

Founded in 2002, SpaceX is a private company owned by management and employees, with minority investments from Founders Fund and Draper Fisher Jurvetson. The SpaceX team now numbers over 800, with corporate headquarters in Hawthorne, California. For more information, please visit the company’s web site at http://www.spacex.com.