By SpaceRef Editor
February 11, 2009
Filed under Commerce, SpaceX, US

This will be a very big year for SpaceX and the NASA Commercial Orbital Transportation Services (COTS) program. In 2006, SpaceX won the NASA COTS competition to demonstrate transport of cargo and optionally crew to and from the International Space Station. Under that agreement, SpaceX will conduct the second flight of its Falcon 9 launch vehicle and first flight of its Dragon spacecraft in 2009. The final flight, scheduled for 2010, will demonstrate Dragon’s ability to berth with the Space Station.

Immediately thereafter, SpaceX will begin conducting the first of 12 operational cargo flights to the Space Station, awarded under the Cargo Resupply Services contract a few months ago. The CRS contract has a minimum value of $1.6B and a maximum value of $3.1B and, as stated by NASA, its success is vital to the future of the Space Station. 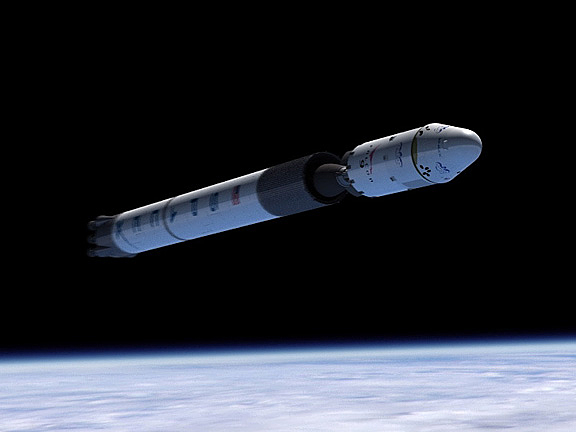 Falcon 9/Dragon configured for cargo delivery to the ISS.

However, what most people aren’t aware of is that SpaceX designed the F9/Dragon system to carry astronauts as well as cargo, and even the word “cargo” here includes biological payloads like plants and mice. F9/Dragon meets all the NASA human rating requirements, such as extra structural safety margins, multi-redundant electronics and acceptable g loads through all phases of flight and abort.

Dragon even has several windows and hatches that open both inwards and outwards to ensure astronauts can exit if a pressure relief valve fails. Moreover, NASA will certify Dragon as habitable for crew even under the COTS A-C program, as it necessarily becomes an integral part of the Space Station and is occupied by astronauts when attached.

The only significant missing element is the launch escape rocket, which carries the Dragon spacecraft to safety in the event of a launch vehicle failure. That can be developed within two years, which means F9/Dragon can be ready to transport astronauts by mid to late 2011. By that date, Falcon 9 will have flown a dozen times and Dragon will have done a round trip journey to the Space Station roughly half a dozen times with cargo, proving out reliability well in advance of carrying people. 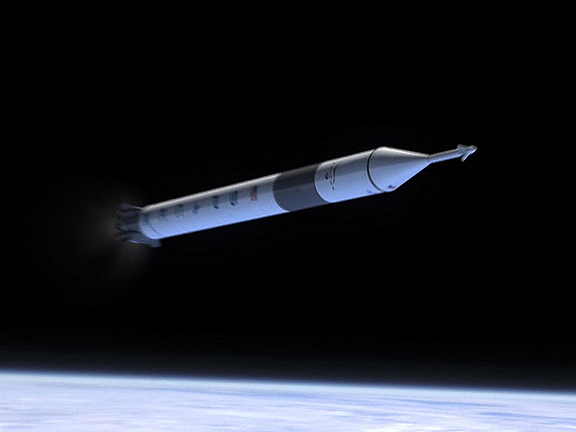 Falcon 9/Dragon configured for crew transport to the ISS. Note both the crew and cargo configurations are very similar, with the most visible difference being the launch escape rocket on the crew configuration.

What this would mean for taxpayers and high tech jobs in the United States is very significant. Let’s consider the default plan under way, which expects that our country will use the Russian Soyuz at the currently negotiated price of $47 million per seat for the period between Shuttle retirement (2010) and Ares/Orion reaching Space Station (2016). Even assuming that we drop the number of US astronauts going to Station from the current 30 per year with Shuttle down to 14 per year, the cost will be approximately $3.3 billion. However, there is also a human cost in the thousands of jobs that the money could have supported back home.

In contrast, F9/Dragon would cost less than $20M per seat and it is 100% manufactured and launched in the United States. We are estimating that it would create well in excess of a 1000 high quality jobs at Cape Canaveral and an equivalent number in California and Texas, where we do our manufacturing and testing. Moreover, the total cost would only be $1.5B, so taxpayers would save nearly $2B.

NASA has already reviewed our cargo F9/Dragon and is comfortable enough to assign it the bulk of the operational transport duties following Shuttle retirement. Although a lot more work would be needed to certify it for astronaut transport to and from the Station, that work can readily be accomplished before the end of 2011, particularly given the empirical flight history it will have by then.

COTS Capability D can be completed within two years from date of funds receipt. In fact, with a little extra money and some modifications to the plan, it can be accelerated even further.

Since COTS Capability D is an existing option in an already competed contract, NASA could exercise it right away, resulting in immediate job creation. It is also worth noting that COTS D, like the COTS A-C funding, is a fixed price agreement and is only awarded as each milestone is achieved. If SpaceX is unable to pass the milestones, no taxpayer money is spent.

If you think this makes sense, please contact your representatives in the House and Senate, as well as Rep. Mollohan and Senator Mikulski who lead the Commerce, Justice and Science Appropriations Subcommittees. Please encourage them to fund NASA Exploration in the Stimulus Bill and provide the $300M in funding necessary to begin COTS Capability D.

Phone calls are best, but email is great too. The information for your support options are below. Thanks in advance for supporting our efforts to supply an American solution to astronaut transportation.

Press Play to see what SpaceX has envisioned for the future, should NASA turn on funding for the COTS Capability D option.

How to show your support

To ask your Congressional representative to support NASA Exploration and COTS Capability D:

Find the contact info for your Congressional representatives at the following links :

To show your support for NASA Exploration and COTS Capability D by phone, please call:

To show your support for NASA Exploration and COTS Capability D by email:

Email them directly at :

If you choose to email, it's best to include your name, address, phone number and email address,
otherwise your email might be considered ‘spam’.

Not sure exactly what to say or write?

It's best to use your own words to express why you think COTS Capability D is important, but feel free to reference the following
Key Points if it's helpful:

Any support you can provide, no matter how brief, will make a difference.