By SpaceRef Editor
March 9, 2011
Filed under Commerce, SpaceX, US 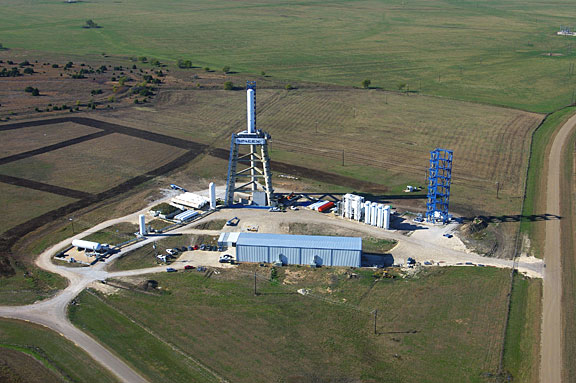 McGregor, TX – Space Exploration Technologies (SpaceX) and the City of McGregor today signed a lease agreement allowing SpaceX to expand the size of its rocket development facility in McGregor.

Under the deal, SpaceX will lease 631 acres — the equivalent of almost 500 football fields — for its test facility. The new lease will more than double the size of the current 256 acre site on the Western edge of the City of McGregor, and will last roughly 10 years, from February 2011 to January 31, 2021.

“Our Texas rocket development facility is critical to our operations,” said Elon Musk, SpaceX CEO and Chief Technology Officer. “This lease will allow us to move forward on the growth we have planned for Texas. SpaceX already has more than $2.5 billion in launch contracts for us to carry out over the next few years – McGregor is going to be a very busy place.”

The McGregor city council voted unanimously to support the proposal on Friday, February 25, 2011. The final contract was signed today.

SpaceX designs, manufactures, tests, and launches reliable, safe and affordable rockets that carry satellites and spacecraft to orbit, and spacecraft to transport cargo and eventually astronauts to and from the International Space Station. Every Merlin engine that powers the company’s Falcon 9 rocket and every Draco thruster that controls its Dragon spacecraft is first tested on the ground in Texas before launch.

Since starting operations in Texas in 2003, SpaceX has invested $50 million in McGregor and expects to have at least 140 employees by year’s end. Texas operations in McGregor will continue to expand to support dozens of upcoming launches already under contract, with more on the way. In addition, SpaceX is in negotiations with NASA to develop and test a launch abort system for the Dragon spacecraft. That development will begin in McGregor.

On December 8, 2010, SpaceX became the first commercial company to successfully return a spacecraft from orbit, a feat achieved by only a few nations in the history of space travel. The December flight was SpaceX’s first demonstration flight under NASA’s COTS program to develop commercial supply services to the International Space Station. SpaceX will fly at least 12 missions as part of a $1.6 billion contract for NASA to carry cargo to and from the Space Station after the Space Shuttle program ends later this year. Both the Dragon spacecraft and SpaceX’s Falcon 9 rocket were designed from the beginning to carry astronauts and are well positioned to fly the first-ever commercial, manned space missions.

The growth in McGregor is reflective of growth company wide. SpaceX now employs over 1,250 employees since being founded in 2002 and the company has been profitable since 2007. In addition to the McGregor site SpaceX has headquarters in Hawthorne, CA; launch facilities at the Air Force Station at Cape Canaveral and the Reagan Test Site (RTS) at U.S. Army Kwajalein Atoll (USAKA); and offices in Chantilly, VA, Huntsville, AL and Washington, DC.