By SpaceRef Editor
May 30, 2012
Filed under Commerce, SpaceX, US 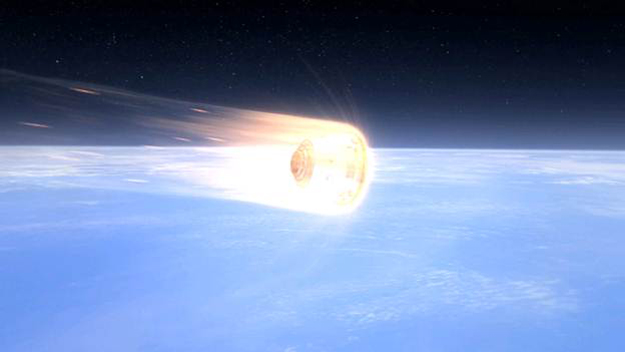 After making the historic journey as the first commercial spacecraft to visit the International Space Station, SpaceX’s Dragon spacecraft will return to Earth tomorrow.

The return is by no means an easy operation. In fact, today, Dragon is the only spacecraft capable of returning a significant amount of cargo from the space station. The other cargo vehicles serving the space station – from Russia, Japan and the European Space Agency – can carry cargo up but all are destroyed after leaving the station.

While Dragon was attached to the space station, astronauts unloaded 1,146 pounds of cargo including food and other crew provisions, student experiments and a laptop that Dragon delivered from Cape Canaveral Florida. They then packed the spacecraft with 1,455 pounds of cargo that will be returned to NASA on Earth including hardware used for experiments, spacewalks and station systems.

This morning, astronauts closed the hatch on the vehicle. Early Thursday, at approximately 1:00 AM Pacific/4:00 AM Eastern, they will use the space station’s robotic arm to pull the spacecraft from the station. Two hours later, the robotic arm will release Dragon and the spacecraft will begin its journey home.

Dragon is targeted to land in the Pacific Ocean, a few hundred miles west of Southern California, at approximately 8:44 AM Pacific/11:44 AM Eastern on Thursday, May 31st. The spacecraft returns to Earth like a burning comet, protected from extreme reentry temperatures by its powerful PICA-X heat shield. The landing location is controlled by firing the Draco thrusters during reentry.

SpaceX will use a 185-foot working barge equipped with a crane, an 80-foot crew boat, and two 25-foot rigid hull inflatable boats (RIB) to conduct recovery operations. On board will be approximately a dozen SpaceX engineers and technicians as well as a four-person dive team.

The boats will be waiting just outside of the targeted landing area. Once Dragon lands in the water, the 25-foot boats will carry the experienced dive team to the floating spacecraft. They will secure the vehicle and tow it to the barge where the crane will pick it up and place it on deck. The ships will then begin the trip back to land. In the future, Dragon will use SuperDraco thrusters to land on a landing pad on ground.

This is SpaceX’s second demonstration flight under a 2006 Commercial Orbital Transportation Services (COTS) agreement with NASA to develop the capability to carry cargo to and from the International Space Station. With the first demonstration flight, in December of 2010, Dragon became the first commercial spacecraft to orbit the Earth and safely return. During that mission SpaceX conducted similar recovery operations to retrieve Dragon from a water landing in the Pacific. Demonstration missions are conducted to determine potential issues so that they might be addressed; by their very nature, they carry a significant risk. If any aspect of the mission is not successful, SpaceX will learn from the experience and try again.

Dragon Return Timeline – (times are approximate and subject to change)