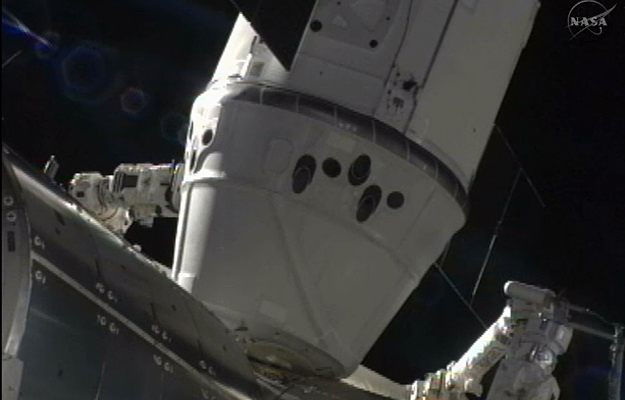 The International Space Station’s Expedition 31 crew grappled and attached SpaceX’s Dragon capsule to the space station Friday. This is the first time a commercial company has accomplished this type of space operation.

“Today marks another critical step in the future of American spaceflight,” NASA Administrator Charles Bolden said. “Now that a U.S. company has proven its ability to resupply the space station, it opens a new frontier for commercial opportunities in space — and new job creation opportunities right here in the U.S. By handing off space station transportation to the private sector, NASA is freed up to carry out the really hard work of sending astronauts farther into the solar system than ever before. The Obama Administration has set us on an ambitious path forward and the NASA and SpaceX teams are proving they are up to the task.”

Following a series of system tests and a successful fly-under of the space station Thursday, the Dragon capsule was cleared by NASA to approach the station Friday. Dragon then performed a series of intricate test maneuvers as it approached the orbiting laboratory. These maneuvers were required to demonstrate the maneuvering and abort capability of Dragon prior to approaching and moving into a 65-foot (20-meter) “berthing box” where it was grappled by NASA astronaut Don Pettit using the station’s robotic arm at 9:56 a.m. EDT.

“Congratulations to the SpaceX and NASA teams,” said William Gerstenmaier, associate administrator for NASA’s Human Exploration and Operations Mission Directorate at the agency’s headquarters in Washington. “There is no limit to what can be accomplished with hard work and preparation. This activity will help the space station reach its full research potential and open up space-based research to a larger group of researchers. There is still critical work left in this test flight. Dragon-attached operations and cargo return are challenging and yet to be accomplished.”

The Dragon capsule lifted off Tuesday from the Cape Canaveral Air Force Station in Florida aboard a SpaceX Falcon 9 rocket. The demonstration mission is the second under NASA’s Commercial Orbital Transportation Services program, which provides investments intended to lead to regular resupply missions to the space station and stimulate the commercial space industry in America.

“The investments made by the United States to stimulate the commercial space industry are paying off,” said Philip McAlister, director for Commercial Spaceflight Development at NASA Headquarters. “SpaceX achieved what until now was only possible by a few governments, and the company did it with relatively modest funding from the government.

The Dragon capsule is delivering 1,014 pounds of supplies to the station, which includes non-critical experiments, food, clothing and technology. Crew members will open the hatch to the capsule Saturday and unload the cargo during a four-day period. Dragon then will be loaded with 1,367 pounds of hardware and cargo no longer needed aboard the station in preparation for the spacecraft’s return to Earth. Dragon and station hatches will be closed on May 30.

On May 31, the Expedition 31 crew members will detach Dragon from Harmony, maneuver it to a 33-foot release point and un-grapple the capsule. Dragon will deorbit approximately four hours after leaving the station, taking about 30 minutes to re-enter Earth’s atmosphere and landing in the Pacific Ocean about 250 miles west of southern California.