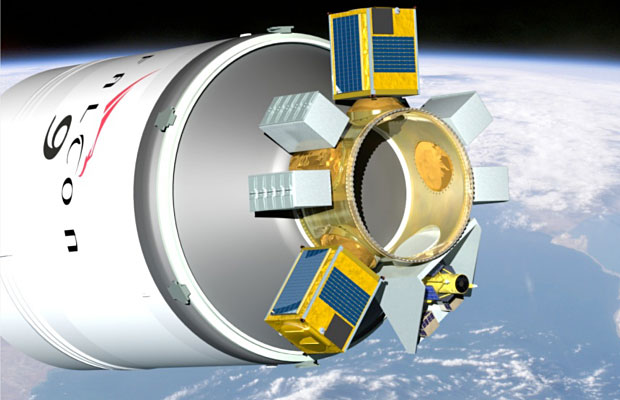 Spaceflight and SpaceX first signed a memorandum of understanding in 2010 to manifest secondary payloads on upcoming Falcon 9 flights. The Launch Services Agreement (LSA) framework recently signed by both parties allows Spaceflightto manifest payloads on any Falcon vehicle designated by SpaceX as having excess capacity.

The first mission under this LSA will be a commercial Falcon 9 mission in early 2013. For this mission Spaceflight will use its Spaceflight Secondary Payload System (SSPS) to support a multitude of small payloads including CubeSats, NanoSats and MicroSats.

The SSPS uses a custom ring, manufactured by Moog CSA Engineering, and a series of shelves and adapters to accommodate secondary payloads on their ride to space. The ring is similar to the Evolved Expendable Launch Vehicle Secondary Payload Adapter (ESPA) ring. The SSPS also features a standalone avionics and power system dedicated to monitoring the secondary payloads, initiating their deployment and relaying video and telemetry of their separation to a ground station.

“This is a significant milestone in the development of a robust launch capability for small and secondary payloads,” said Jason Andrews, President and CEO of Spaceflight Inc. “With the launch of our SSPS we now have a dedicated systemto increase space access for this growing market segment.”

Information on the SSPS, as well as the latest manifest and mission pricing can be found on Spaceflight’s website at: www.spaceflightservices.com.

Spaceflight Inc. was established in 2009 by Jason Andrews, President and CEO of Andrews Space, to revolutionize secondary payload flight services for fixed and deployable cargo and transport. More information about Spaceflight and specific flight opportunities can be found on the company’s website: www.spaceflightservices.com

SpaceX designs, manufactures and launches the world’s most advanced rockets and spacecraft. With a diverse manifest of launches to deliver satellites to orbit, SpaceX is the world’s fastest growing space launch company. In 2010, SpaceX became the first commercial company in history to put a spacecraft into orbit and return it safely to Earth. With the retirement of the space shuttle, the SpaceX Falcon 9 rocket and Dragon spacecraft will soon carry cargo, and one day astronauts, to and from the Space Station for NASA. For more information, visit www.SpaceX.com.