By SpaceRef Editor
July 8, 2014
Filed under Commerce, Spaceflight Services, US 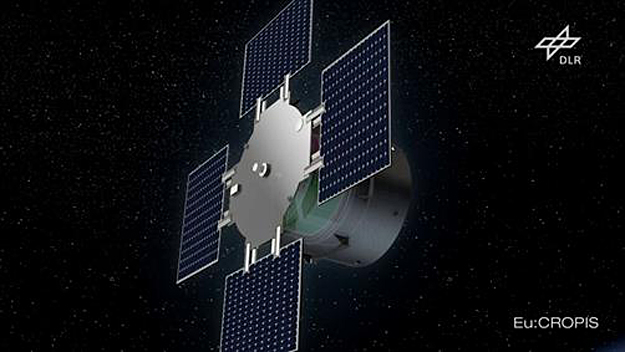 Spaceflight Inc., the company reinventing the model for launching small satellites into space, today announced it has signed the German Aerospace Center (DLR) to a launch services agreement for the Eu:CROPIS mission. The Eu:CROPIS spacecraft is scheduled for a rideshare launch on a Spaceflight SHERPA vehicle in 2017.

Seeking to simulate the differing levels of gravity on Mars and the Moon, engineers at the DLR Institute of Space Systems and the DLR Institute of Composite Structures and Adaptive Systems are developing and building a 250 kilogram lightweight greenhouse satellite, designed to rotate around its longitudinal axis while orbiting at an altitude of roughly 600 kilometers. In doing so, it will replicate lunar gravity, which is 0.16 times the gravity on Earth, or 0.38 times–the gravity on Mars–depending on the rotational speed. The Eu:CROPIS mission will operate two greenhouse environments. The first of the two greenhouse satellites will operate under lunar conditions for the first six months, while the second greenhouse satellite will operate in a Martian environment for the following six months.

“Our greenhouse in space is a complex system which allows all organisms involved to benefit from each other,” said DLR Principle Investigator Dr. Jens Hauslage.

In the greenhouses, a combined life-support system will utilize waste product to manufacture fertilizer and help grow tomatoes for a lunar and Mars habitat, as well as for long duration missions.

“Therefore, we developed with Eu:CROPIS a satellite which is adapted to the specific requirement of its payload to the highest extent possible,” said Hartmut Müller, project manager at DLR.

“We are thrilled to work with the German Aerospace Center and to provide cost-effective access to space for scientific research missions,” said Curt Blake, president of Spaceflight. “We are proud that our payload deployment solutions can enable cutting edge research for civil space agencies that will ultimately contribute to human space exploration.”

Founded in 2011, Spaceflight has launched 47 satellites to date, and has more than 105 spacecrafts under contract for launches scheduled between 2014 and 2017. For more information about Spaceflight’s launch services, visit www.spaceflightservices.com.

Spaceflight, “The Space Logistics Company,” provides frequent, cost-effective and routine access to space for deployed and hosted payloads. Spaceflight specializes in the launch of CubeSats, NanoSats and MicroSats. Through its global network of launch vehicle providers, Spaceflight can deploy payloads to low Earth orbit, the Moon and beyond. For more information, please visit on the web at www.spaceflightservices.com and follow @spaceflightinc on Twitter.

About the German Aerospace Center

DLR is the national aeronautics and space research center of the Federal Republic of Germany. Its extensive research and development work in aeronautics, space, energy, transport and security is integrated into national and international cooperative ventures. In addition to its own research, as Germany’s space agency, DLR has been given responsibility by the federal government for the planning and implementation of the German space program. DLR’s mission comprises the exploration of Earth and the Solar System and research for protecting the environment. This includes the development of environment-friendly technologies for energy supply and future mobility, as well as for communications and security. DLR’s research portfolio ranges from fundamental research to the development of products for tomorrow. In this way, DLR contributes the scientific and technical expertise that it has acquired to the enhancement of Germany as a location for industry and technology. DLR operates major research facilities for its own projects and as a service for clients and partners. It also fosters the development of the next generation of researchers, provides expert advisory services to government and is a driving force in the regions where its facilities are located.