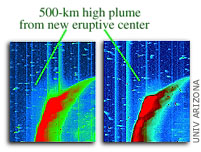 Jupiter’s moon Io has pulled a surprise on NASA’s Galileo
spacecraft, hurling up the tallest volcanic plume ever seen,
which arose from a previously unknown volcano.

A different volcano had been lofting a plume seven months
earlier, but Galileo saw no sign of that plume during its
latest Io flyby in early August.

Adding to the surprise, for the first time a Galileo
instrument has caught particles freshly released from an
eruption, giving scientists a direct sample of Io material to
analyze. “This was totally unexpected,” said the leader of
that experiment, Dr. Louis Frank of the University of Iowa,
Iowa City. “We’ve had wonderful images and other remote
sensing of the volcanoes on Io before, but we’ve never caught
the hot breath from one of them until now. Galileo smelled the
volcano’s strong breath and survived.”

The Jupiter-orbiting spacecraft has been gradually
transmitting to Earth the new pictures and data from its
flight over Io’s north pole in early August, said Dr. Eilene
Theilig, Galileo project manager at NASA’s Jet Propulsion
Laboratory, Pasadena, Calif. “Io just keeps amazing
everyone,” she said. “Now we’re eager to see what will be
happening there when Galileo flies near Io’s south pole in two
weeks.”

Galileo engineers and scientists had anticipated that the
Aug. 6 flyby (Aug. 5, Pacific time) might take the spacecraft
right through gases rising from a volcano named Tvashtar near
Io’s north pole. Tvashtar had been lofting a high plume when
last seen seven months earlier by both Galileo and the passing
Cassini spacecraft. However, the Tvashtar plume has not been
found in images from the August flyby. Researchers were
startled to find, instead, that a previously unknown volcano
just 600 kilometers (370 miles) from Tvashtar was spewing a
grand plume as Galileo passed.

“After not seeing any active plumes at all in Io’s high-
latitude regions during the first five years of Galileo’s
tour, we’ve now seen two this year,” said Galileo imaging team
member Dr. Alfred McEwen of the University of Arizona, Tucson.
The latest appears as a back-lit bulge above Io’s surface in
two newly released images. A third new image shows a white
ring of material from the plume that has fallen back to the
moon’s surface, painting a circle around the source of the
eruption. A fourth shows another new large plume deposit near
Io’s north pole.

The images are available online from JPL at
http://www.jpl.nasa.gov/images/io and from the University of
Arizona at http://pirlwww.lpl.arizona.edu/Galileo/Releases .

The new plume rises at least 500 kilometers (more than
300 miles) above ground, McEwen estimated, nearly 10 percent
higher than the tallest ever seen before on Io.

Scientists using Galileo’s infrared mapping instrument
have pinpointed the site of the eruption as a new hot spot at
a location that was not known to be an active volcano, said
JPL volcanologist Dr. Rosaly Lopes. It was surprising that the
site leapt to such intense activity so abruptly with so little
evidence of former volcanism, she said.

“Galileo flew between two great volcanoes,” Lopes said.
“The plume we knew about might have settled down before we got
there, but this new one sprang up suddenly.”

The particles detected in Galileo’s plasma science
instrument as the aging spacecraft sped within 194 kilometers
(120 miles) of Io’s surface likely came from the new hot spot
rather than Tvashtar, Frank said. The volcanic material
reached the spacecraft no more than a few minutes after
rushing out of the source vent on the ground. The particles
are apparently snowflakes made of sulfur-dioxide molecules
with as many as 15 to 20 molecules clumped together in each
flake.

Frank and co-workers will try to wring information from
the particle impacts about the temperature and speed of the
gas in the plume. “That will get us a step closer to knowing
about the newly released material from a volcanic vent,” he
said.

Galileo is on course to fly about as close to Io again at
0123 Universal Time on Oct. 16 (5:23 p.m. Oct. 16, Pacific
time). Its trajectory will take it close to Io’s south pole,
which may provide a look at details of another new hot spot
near there identified from infrared mapping data this year.
The polar passes in August and this month were also designed
to provide data indicating whether Io generates its own
magnetic field, as its sibling moon Ganymede does and Earth
does.

Io is the innermost of Jupiter’s four largest moons and
the most volcanically active world in the solar system.
Galileo will get its sixth and final encounter with Io in
January 2002. It has also flown 27 close approaches to
Jupiter’s other three large moons: Europa, Ganymede and
Callisto. Since it began orbiting Jupiter in 1995, Galileo has
survived more than three times the radiation exposure it was
designed to withstand. It is still is good overall health, but
performance of some instruments has been degraded.

JPL, a division of the California Institute of Technology
in Pasadena, manages Galileo for NASA’s Office of Space
Science, Washington, D.C. Additional information about the
mission is available online at http://galileo.jpl.nasa.gov .