By SpaceRef Editor
May 6, 2015
Filed under Commerce, United Kingdom, University of Southampton 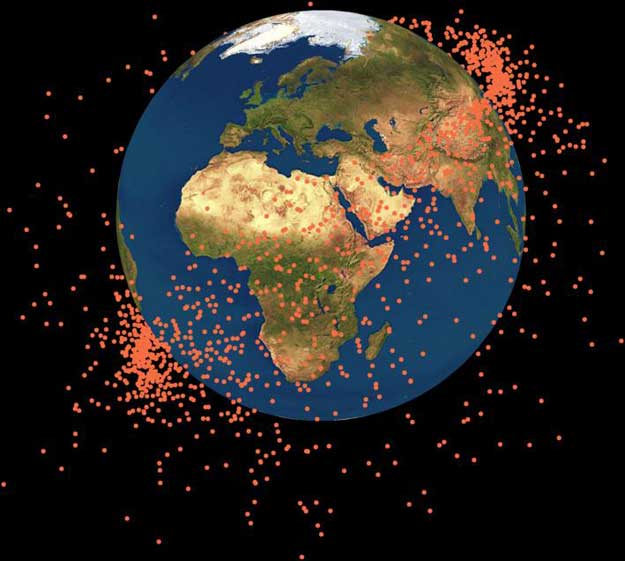 Debris from the US Defense Meteorological Satellite Program (DMSP) F13 satellite, which recently exploded in orbit, could pose a threat to other spacecraft and missions according to new research from the University of Southampton.

On 3 February 2015, the DMSP F13 satellite exploded in orbit producing over an estimated 100 pieces of space debris that were detected using radar. In assessing how debris created by the explosion might affect their spacecraft, the European Space Agency and other satellite operators concluded that it would pose little risk to their missions.

However, scientists from the Astronautics Research Group at the University of Southampton investigated the risks to a wide range of space missions, coming from smaller pieces of debris created by the explosion that cannot be detected using radar based on the ground.

In the case of the explosion of DMSP-F13, they detected 100 new catalogued objects, which suggest that more than 50,000 small fragments larger than 1mm were created.

PhD student Francesca Letizia, who led the research under the supervision of Dr Camilla Colombo and Dr Hugh Lewis, says: “The fragments from the explosion spread around the Earth forming a band, which can be crossed by spacecraft with orbits that are quite different from the one of DMSP-F13.”

The Southampton team developed a new technique called CiELO (debris Cloud Evolution in Low Orbits) to assess the collision risk to space missions from small-sized debris. They produced a collision probability map showing a peak in the risk at altitudes just below the location of the DMSP-F13 explosion. The map was created by treating the debris cloud produced by the explosion as a fluid, whose density changes under the effect of atmospheric drag.

Dr Colombo, who proposed this idea as a part of a Marie Curie project in the European 7th Framework Programme, says: “Treating the fragment band as a fluid allows us to analyse the motion of a large number of fragments very quickly, and much faster than conventional methods. In this way, the presence of small fragments can be easily taken into account to obtain a refined estimation of the collision probability due to an explosion or a collision in space.”

Francesca, who was awarded the 2013 Amelia Earhart Fellowship for this work, adds: “This map can be used with a database of spacecraft or space debris objects to identify the targets that are most exposed. For example, in the map we show the top ten spacecraft at risk from the fragments generated by the explosion of DMSP-F13 according to our model. They are mainly US and Russian satellites in sun-synchronous or polar orbits.”

The aim of the team’s research is to gain a deeper insight into the dynamics of small debris fragments and their contribution to collision risk in the Earth orbital environment.  Dr Lewis, who represents the UK Space Agency on the Inter-Agency Space Debris Coordination Committee (IADC), says that it is important to understand this contribution: “Even though many of these objects will be no bigger than the ball in a ballpoint pen, they can disable a spacecraft in a collision because of their enormous speed. In the case of the DMSP-F13 explosion, our work has shown that the introduction of a new cloud of small-sized debris into orbit will have increased the risks for other spacecraft in the vicinity, even if the risk from the larger fragments has been discounted.”

The research is published in the Journal of Guidance, Control, and Dynamics.

1. The attached image shows the spreading of the fragmentation cloud to form a band of debris (exaggerated size). Further images of the formation of the debris cloud are available.

2. A copy of the paper ‘Analytical Model for the Propagation of Small-Debris-Object Clouds After Fragmentations’ by Francesca Letizia, Camilla Colombo, Hugh Lewis, doi: 10.2514/1.G000695 is available from Media Relations on request.

3. Through world-leading research and enterprise activities, the University of Southampton connects with businesses to create real-world solutions to global issues. Through its educational offering, it works with partners around the world to offer relevant, flexible education, which trains students for jobs not even thought of. This connectivity is what sets Southampton apart from the rest; we make connections and change the world. http://www.southampton.ac.uk/