Sonograms of the Sun Explain Mystery of the Missing Sunspots

Boulder, Colorado — Scientists from the National Solar Observatory (NSO) in Tucson, Arizona, have discovered that a solar jet stream deep inside the Sun is migrating slower than usual through the star’s interior, giving rise to the current lack of sunspots and low solar activity, according to work being presented this week at the meeting of the Solar Physics Division of the American Astronomical Society (AAS/SPD).

The Sun normally undergoes an eleven-year cycle of magnetic activity related to sunspots, solar flares, and the interplanetary storms called “CMEs”. The current “solar minimum” quiet period has been unusually long and deep, confounding scientists who hope to understand the origins of space weather and the Sun’s magnetic field.

Drs. Rachel Howe and Frank Hill, both of the NSO, used long-term observations from the NSO’s Global Oscillation Network Group (GONG) facility to detect and track an east-to-west jet stream, known as the “torsional oscillation”, at depths of ~1,000 to 7,000 km below the surface of the Sun. The Sun generates new jet streams near its poles every 11 years; the streams migrate slowly, over a period of 17 years, to the equator, and are associated with the production of sunspots once they reach a critical latitude of 22 degrees.

Howe and Hill found that the stream associated with the new solar cycle has moved sluggishly, taking three years to cover a 10 degree range in latitude compared to two years for the last solar cycle, but has now reached the critical latitude. The current solar minimum has become so long and deep, some scientists have speculated the Sun might enter a long period with no sunspot activity at all. The new result both shows that the Sun’s internal magnetic dynamo continues to operate, and heralds the beginning of a new cycle of solar activity. 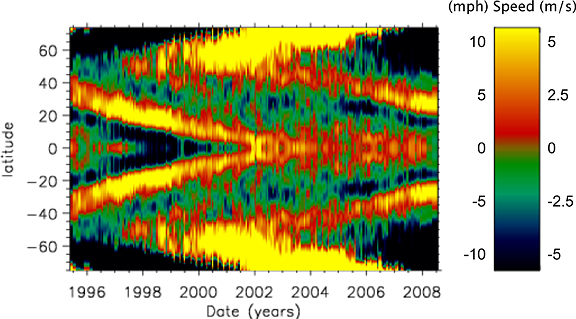 “It is exciting to see”, said Dr. Hill, “that just as this sluggish stream reaches the usual active latitude of 22 degrees, a year late, we finally begin to see new groups of sunspots emerging at the new active latitude.” Since the current minimum is now one year longer than usual, Howe and Hill conclude that the extended solar minimum phase may have resulted from the slower migration of the flow.

GONG and its sister instrument SOHO/MDI measure sound waves on the surface of the Sun. Scientists can then use the sound waves to probe structures deep in the interior of the star, in a process analogous to a sonogram in a medical office. “Using the global sound wave inversions, we have been able to reveal the intimate connection between subtle changes in the Sun’s interior and the sunspot cycle on its surface,” said Hill.

“This is an important piece of the solar activity puzzle,” said Dr. Dean Pesnell, of NASA’s Goddard Space Flight Center. “It shows how flows inside the Sun are related to the creation of solar activity and how the timing of the solar cycle might be produced. None of the forecasting research groups predicted the current long extended delay in the new cycle. There is a lot more to learn in order to understand how the Sun creates magnetic fields.”

The new science of helioseismology, enabled by instruments such as the ground- based GONG, the Michelson Doppler Imager aboard the SOHO spacecraft, and NASA’s planned Solar Dynamics Observatory, has revolutionized understanding of the solar interior. “While the surface effects of the Sun’s torsional oscillations have been observed for some time, understanding of the dynamo and the origin of sunspots depend on measurements of the solar interior that are only possible with helioseismic techniques”, said Hill.