A new study published in Nature this week reveals that asteroid
surfaces age and redden much faster than previously thought — in less
than a million years, the blink of an eye for an asteroid. This study
has finally confirmed that the solar wind is the most likely cause of
very rapid space weathering in asteroids. This fundamental result will
help astronomers relate the appearance of an asteroid to its actual
history and identify any after effects of a catastrophic impact with
another asteroid.

“Asteroids seem to get a ‘sun tan’ very quickly,” says lead author
Pierre Vernazza. “But not, as for people, from an overdose of the
Sun’s ultraviolet radiation, but from the effects of its powerful
wind.”

It has long been known that asteroid surfaces alter in appearance with
time — the observed asteroids are much redder than the interior of
meteorites found on Earth [1] — but the actual processes of this
“space weathering” and the timescales involved were controversial.

Thanks to observations of different families of asteroids [2] using
ESO’s New Technology Telescope at La Silla and the Very Large
Telescope at Paranal, as well as telescopes in Spain and Hawaii,
Vernazza’s team have now solved the puzzle. 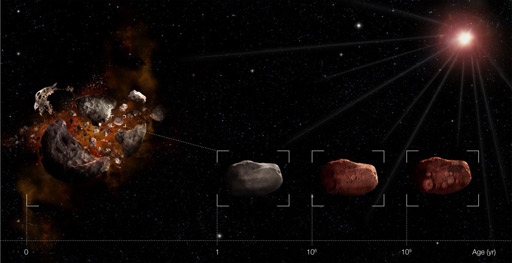 When two asteroids collide, they create a family of fragments with
“fresh” surfaces. The astronomers found that these newly exposed
surfaces are quickly altered and change color in less than a million
years — a very short time compared to the age of the Solar System.

“The charged, fast moving particles in the solar wind damage the
asteroid’s surface at an amazing rate [3]”, says Vernazza. Unlike
human skin, which is damaged and aged by repeated overexposure to
sunlight, it is, perhaps rather surprisingly, the first moments of
exposure (on the timescale considered) — the first million years —
that causes most of the aging in asteroids.

By studying different families of asteroids, the team has also shown
that an asteroid’s surface composition is an important factor in how
red its surface can become. After the first million years, the surface
“tans” much more slowly. At that stage, the color depends more on
composition than on age. Moreover, the observations reveal that
collisions cannot be the main mechanism behind the high proportion of
“fresh” surfaces seen among near-Earth asteroids. Instead, these
“fresh-looking” surfaces may be the results of planetary encounters,
where the tug of a planet has “shaken” the asteroid, exposing
unaltered material.

Thanks to these results, astronomers will now be able to understand
better how the surface of an asteroid — which often is the only thing
we can observe — reflects its history.

[1] Meteorites are small fragments of asteroids that fall on Earth.
While a meteorite enters the Earth’s atmosphere its surface can melt
and be partially charred by the intense heat. Nevertheless, the
meteorite interior remains unaffected, and can be studied in a
laboratory, providing a wealth of information on the nature and
composition of asteroids.

[2] An asteroid family is a group of asteroids that are on similar
orbits around the Sun. The members of a given family are believed to
be the fragments of a larger asteroid that was destroyed during a
collision.

[3] The surface of an asteroid is affected by the highly energetic
particles forming the solar wind. These particles partially destroy
the molecules and crystals on the surface, re-arranging them in other
combinations. Over time, these changes give formation of a thin crust
or irradiated material with distinct colors and properties.