By SpaceRef Editor
May 15, 2012
Filed under Coalition for American Solar Manufacturing, Commerce, US 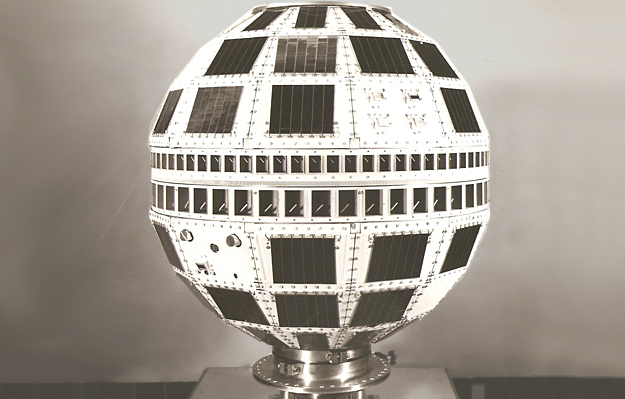 Today marks T-minus two months to the 50th anniversary of the launch of the solar-powered Telstar satellite, which christened the modern media era by transmitting the first intercontinental television broadcasts.

Launched July 10, 1962, amid the accelerating Cold War space race and powered by 3,600 solar cells, the Telstar was a U.S. engineering triumph and a world sensation. The satellite subsequently beamed the first live TV signal and telephone call through space. Moreover, solar-powered satellites would go on to play key roles in weather observation and intelligence-gathering. In fact, the Telstar was among the crowning breakthroughs of the American ingenuity powerhouse Bell Labs.

An important book out this spring, “The Idea Factory: Bell Labs and the Great Age of American Innovation,” by Jon Gertner, celebrates and examines Bell Labs’ record of innovation, including not only the Telstar launch but also the invention of the silicon-based solar industry in the early 1950s.

The advances marked just two milestones in a more-than-125-year solar strand of American industrial heritage that gives the solar industry special standing in the nation’s technology pioneering. In that light, the Coalition for American Solar Manufacturing (CASM) hails the approach of the Telstar anniversary as a time to recognize the inseparable lineage of U.S. solar ingenuity and manufacturing as a national industrial treasure. Today, solar manufacturing is realizing the promise of decades of American entrepreneurial striving by offering a robust source of rising energy security and independence.

In “The Idea Factory,” Gertner argues that in addressing urgent needs for clean, safe energy, the nation must follow Bell Labs’ powerful example: “To think long-term toward the revolutionary, and to simultaneously think near-term toward manufacturing, comprises the most vital of combinations.” For that reason, CASM argues that United States’ solar-manufacturing know-how, workforce and innovation are too valuable to overlook and too critical to discard in the interest of artificially – and temporarily – low prices resulting from a predatory export drive sponsored by the government of China.

“If the industry becomes a casualty to illegal trade practices, it is unlikely to come back, and with its disappearance will go the vital thrust of development and research that otherwise could continue to grow solar-industry jobs and brighten U.S. prospects for energy security,” said Gordon Brinser, president of SolarWorld Industries America Inc., the largest U.S. solar producer and leader of CASM. “If better product performance or low production cost were winning the day, then so be it. But that is not the case.”

Just at the tipping point of mainstream U.S. adoption, the government of China – without an innovative history or cost advantage in solar manufacturing – is resolved to dominate the world solar industry at the expense of U.S. manufacturers and jobs, according to CASM. Fueling its state-sponsored industry with a raft of export-intensive subsidies, 10 categories of which the Department of Commerce has found to be illegal so far, the Chinese government effectively declared a trade war on the U.S. industry in 2008, CASM says. The coalition formed to advance anti-subsidy and anti-dumping trade cases to hold the Chinese government and industry accountable to world trade law.

Modern solar technology’s U.S. roots reach at least to 1885 when Charles Fritts of New York City built the first solar cell using selenium. Edward Weston – founder of Weston Electric Light Co. of Newark, N.J., and the contractor to illuminate the Brooklyn Bridge – secured a patent for a solar cell in 1888. But perhaps most pivotally, three researchers at Bell Labs, located in Murray Hill, N.J., harnessed the photoelectric effect on silicon in 1954, setting the course for solar-industry’s mainstay technology.

Over ensuing decades, solar powered Skylab in the 1970s, provided electricity for maritime buoys, oil derricks and traffic signage in the 1980s, enabled the rollout of cellular networks in the 1990s and supplied clean, on-grid power for businesses and homes beginning in 2000. Meantime, U.S. factories served as crucibles of innovation in mass production. In particular, SolarWorld’s legacy plant in California was known for developing solar-panel lamination in the late 1970s as well as for achieving the world’s first 1 MW of annual solar production and the first 1 MW solar power plant in the early 1980s.

Today, solar deployment is spreading swiftly and globally. In 2011, SolarWorld, which accepted no federal subsidies in its investment of more than $500 million in its manufacturing plant in Oregon, alone saw its panels installed at the joint Naval-Air Force base in Pearl Harbor, throughout the service hub for Yosemite National Park and over public parking at the Cincinnati Zoo. SolarWorld panels even went up to cover the 17-acre roof of a giant warehouse, cold-storage and distribution center in Edison, N.J., named after the American inventor who famously hailed the advent of solar power technology.

But China’s state-sponsored export drive threatens the U.S. domestic industry. In all, at least 12 domestic manufacturers have shut down plants, declared bankruptcy or staged significant layoffs since 2010. Poignantly, MX Solar, located in a New Jersey valley that Bell Labs’ hometown of Murray Hill overlooks, is among manufacturers that co-founded CASM to counter China’s predatory onslaught.
“The historical campus of Bell Labs is a 20-minute drive from our plant,” said Carlo Santoro, director of business development for MX Solar. “Domestic solar innovation and production as well as U.S. solar installation – which we will always have, regardless of production source – are the twin keys to continuing to open solar’s promise of rising energy independence and security and strong and growing factories and manufacturing jobs. To move forward, we first must fully recognize what’s at stake.”

In the first major ruling in the trade cases, the U.S. International Trade Commission issued a unanimous preliminary finding that Chinese trade practices were injuring the domestic manufacturing industry. In the next major ruling, the Department of Commerce will announce on May 17 the extent to which it has determined the Chinese solar industry has dumped solar cells and panels on the U.S. market to drive out domestic producers and, if so, by what percentage margins. Those margins would be assessed as duties on imports of Chinese products to offset illegal trade practices.