On Friday, 12 March 2004, the Sun ejected a spectacular ‘eruptive prominence’ into the heliosphere. SOHO, the ESA/NASA solar watchdog observatory, faithfully recorded the event.

This ‘eruptive prominence’ is a mass of relatively cool plasma, or ionised gas. We say ‘relatively’ cool, because the plasma observed by the Extreme-ultraviolet Imaging Telescope (EIT) on board SOHO was only about 80 000 degrees Celsius, compared to the plasma at one or two million degrees Celsius surrounding it in the Sun’s tenuous outer atmosphere, or ‘corona’.

At the time of this snapshot, the eruptive prominence seen at top right was over 700 000 kilometres across – over fifty times Earth’s diameter – and was moving at a speed of over 75 000 kilometres per hour.

SOHO is a mission of international co-operation between ESA and NASA, launched in December 1995. Every day SOHO sends thrilling images from which research scientists learn about the Sun’s nature and behaviour. Experts around the world use SOHO images and data to help them predict ‘space weather’ events affecting our planet. 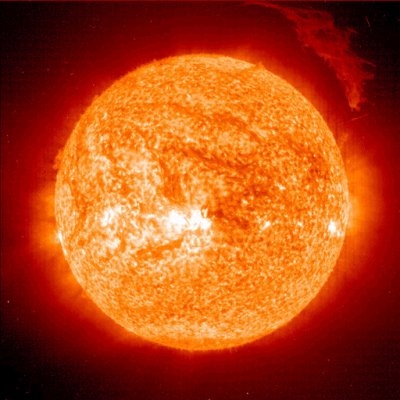