By SpaceRef Editor
January 11, 2013
Filed under Astrophysics, NASA HQ, US 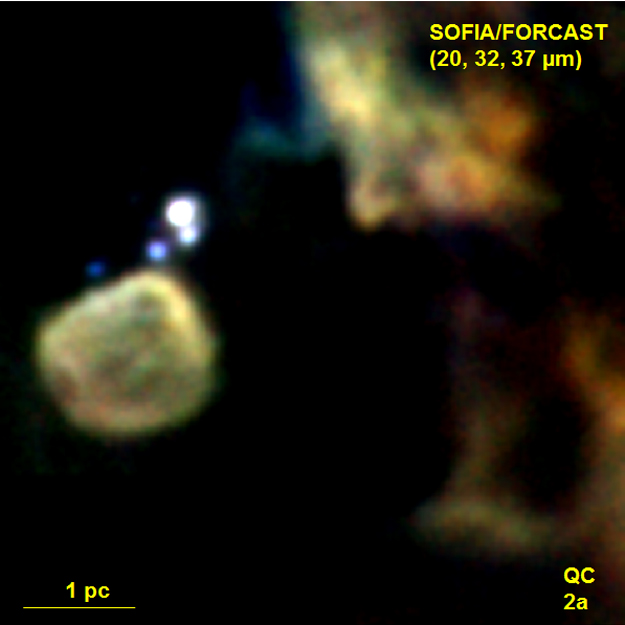 Researchers using the Stratospheric Observatory for Infrared Astronomy (SOFIA) have captured new images of a ring of gas and dust seven light-years in diameter surrounding the supermassive black hole at the center of the Milky Way, and of a neighboring cluster of extremely luminous young stars embedded in dust cocoons.

The images of our galaxy’s Circumnuclear Ring (CNR) and the neighboring Quintuplet Cluster (QC) are the subjects of two posters presented this week during the American Astronomical Society’s meeting in Long Beach, Calif. Ryan Lau of Cornell University and his collaborators studied the CNR. Matt Hankins of the University of Central Arkansas in Conway is lead author of the other paper, regarding the QC.

SOFIA is a highly modified Boeing 747SP aircraft carrying a telescope with an effective diameter of 100 inches (2.5 meters) to altitudes as high as 45,000 feet (14 km). The images were obtained during SOFIA flights in 2011 with the Faint Object infraRed Camera for the SOFIA Telescope (FORCAST) instrument built by a team with principal investigator Terry Herter of Cornell.

FORCAST offers astronomers the ability to see the CNR and QC regions and other exotic cosmic features whose light is obscured by water vapor in Earth’s atmosphere and interstellar dust clouds in the mid-plane of the Milky Way. Neither ground-based observatories on tall mountain peaks nor NASA’s orbiting Hubble space Telescope can see them.

The SOFIA images may be seen at http://www.nasa.gov/sofia and http://www.sofia.usra.edu

Each image is a combination of multiple exposures at wavelengths of 20, 32, and 37 microns.

Figure 1a shows the CNR, and Figure 2a shows the QC. The CNR and other exotic features revealed by SOFIA’s FORCAST camera are invisible to Hubble’s near-infrared camera, as shown for comparison in Figures 1b and 2b. Figure 3 shows the two fields studied in these papers as square insets on a large-scale image of the galactic center made by the Spitzer Space Telescope at an infrared wavelength of 8 microns.

“The focus of our study has been to determine the structure of the Circumnuclear Ring with the unprecedented precision possible with SOFIA” said Lau. “Using these data we can learn about the processes that accelerate and heat the ring.”

The nucleus of the Milky Way is inhabited by a black hole with 4 million times the mass of the Sun and is orbited by a large disk of gas and dust. The CNR seen in Figure 1a is the inner edge of that disk. The galactic center also hosts several exceptionally large star clusters containing some of the most luminous young stars in the galaxy, one of which is the Quintuplet Cluster seen in Figure 2. The combination of SOFIA’s airborne telescope with the FORCAST camera produced the sharpest images of those regions ever obtained at mid-infrared wavelengths, allowing discernment of new clues about what is happening near the central black hole.

“Something big happened in the Milky Way’s center within the past 4 million to 6 million years which resulted in several bursts of star formation, creating the Quintuplet Cluster, the Central Cluster, and one other massive star cluster.” said Hankins, lead author of the QC paper. “Many other galaxies also have so-called ‘starbursts’ in their central regions, some associated with central black holes, some not. The Milky Way’s center is much nearer than other galaxies, making it easier for us to explore possible connections between the starbursts and the black hole.”

SOFIA Chief Scientific Advisor Eric Becklin, who is working with the CNR group, determined the location of the galaxy’s nucleus as a graduate student in the 1960s by laboriously scanning a single-pixel infrared detector to map the central region.

“The resolution and spatial coverage of these images is astounding, showing what modern infrared detector arrays can do when flown on SOFIA,” Becklin said. “We hope to use these data to substantially advance our understanding of the environment near a supermassive black hole.”

SOFIA is a joint project of NASA and the German Aerospace Center. SOFIA is based and managed at NASA’s Dryden Aircraft Operations Facility in Palmdale, Calif. NASA’s Ames Research Center in Moffett Field, Calif., manages the SOFIA science and mission operations in cooperation with the Universities Space Research Association headquartered in Columbia, Md., and the German SOFIA Institute at the University of Stuttgart.