SOFIA Peers Into the Heart of the Orion Nebula

By SpaceRef Editor
December 20, 2011
Filed under Chandra, NASA HQ, US 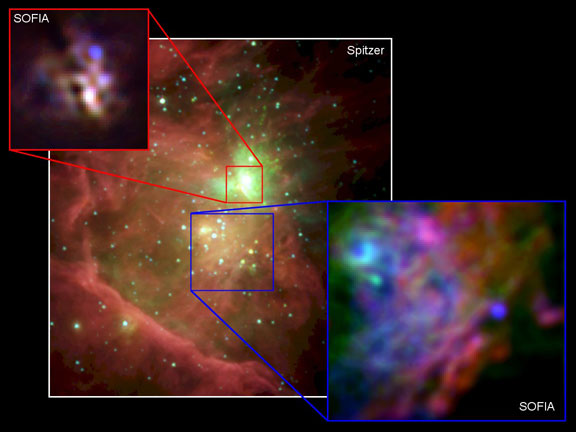 A new image from NASA’s Stratospheric Observatory for Infrared Astronomy (SOFIA) shows a complex distribution of interstellar dust and stars in the Orion nebula. Interstellar dust, composed mostly of silicon, carbon and other heavy elements astronomers refer to generically as “metals,” plus some ice and organic molecules, is part of the raw material from which new stars and planets are forming.

The two insets display mid-infrared images showing portions of the Orion Nebula star-forming region, also known as Messier 42 (M42). The SOFIA images were produced by SOFIA staff scientist James De Buizer and his collaborators from data obtained in May-June 2011 during SOFIA’s Basic Science program. The observations were made using the FORCAST (Faint Object Infrared Camera for the SOFIA Telescope) instrument (Principal Investigator Terry Herter, Cornell University). Those observations are subjects of scientific papers to be submitted to The Astrophysical Journal.

SOFIA’s large telescope is able to resolve many individual protostars and young stars as well as knots of dust and gas that could be starting theprocess of gravitational contraction to become stars. The massive protostarknown famously as the BN (Becklin-Neugebauer) Object stands out as the individual blue source in the red inset box. The BN/KL region of Orion gets its name from the initials of pioneering infrared astronomers Eric Becklin, Gerry Neugebauer, Doug Kleinmann, and Frank Low who mapped it in the late 1960s and early 1970s using some of the first astronomical infrared detectors. In this image, infrared light with wavelengths of 20, 31, and 37 microns, symbolized respectively by blue, green, and red, is seen coming from relatively cool interstellar dust with temperatures of approximately 100–200 Kelvin.

The SOFIA image in the blue inset box shows the Ney-Allen Nebula, a region of intense infrared emission that was discovered surrounding the luminous Trapezium stars by astronomers Ed Ney and David Allen. Some of thecompact features shown here are disks of dust and gas around young solar-mass stars that could be planetary systems in the process of formation. In this image, blue, green, and red respectively symbolize infrared light with wavelengths of 8, 20, and 37 microns, coming from material as warm as 500 Kelvin (450oF).

The large background image is a composite of data from the Spitzer Space Telescope in which light with wavelengths of 7.9, 4.5, and 3.6 microns (represented respectively by red, green, and blue) is emitted from hot dust and gas heated by embedded stars, and from the stars themselves. The BN/KL region is so bright as to be over-exposed in the Spitzer image.

The two SOFIA images were made at combinations of wavelengths and angular resolutions unavailable to any other observatory on the ground or in space. The SOFIA and Spitzer images of Orion together provide a comprehensive view of stages of star formation from cold interstellar clouds to fully-fledged stars.

SOFIA is a Boeing 747SP aircraft extensively modified to carry a 17-ton reflecting telescope with an effective diameter of 2.5 meters (100 inches) to altitudes as high as 45,000 feet (14 km), above more than 99 percent of the water vapor in Earth’s atmosphere that blocks most infrared radiation from celestial sources. SOFIA is a joint project of NASA and the German Aerospace Center (DLR), and is based and managed at NASA’s Dryden Aircraft Operations Facility in Palmdale, Calif. NASA’s Ames Research Center in Moffett Field, Calif., manages the SOFIA science and mission operations in cooperation with the Universities Space Research Association (USRA), headquartered in Columbia, Md., and the GermanSOFIA Institute (DSI) at the University of Stuttgart.