By SpaceRef Editor
February 13, 2013
Filed under Commerce, Skybox Imaging, US 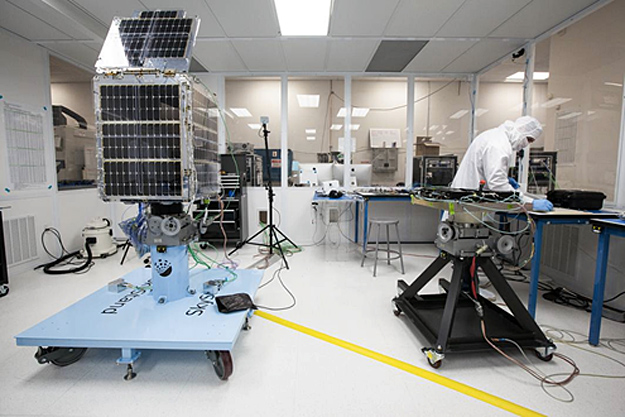 MOUNTAIN VIEW, Calif. – Skybox Imaging (Skybox), an emerging provider of timely satellite imagery and data services, today announced it is adding an imaging satellite, SkySat-2, to its fleet during 2013 via a newly available secondary launch opportunity aboard a Soyuz-Fregat. Skybox has secured this launch opportunity by contracting with JSC Glavkosmos, a secondary payload launch provider within the Russian Federal Space Program that works on behalf of the Russian Federal Space Agency (Roscosmos).

The previously unplanned spacecraft will substantially increase Skybox’s near-term imaging capacity and accelerate the availability of timely information products. Skybox can respond to new launch opportunities like this Soyuz launch because it is capable of building a high-resolution imaging satellite within nine months, thus demonstrating the company’s capability to scale to a near-term, multi-satellite constellation.

“The ability to build and launch a satellite with the capabilities of Skybox’s satellites in less than a year was impossible five years ago,” said Joe Rothenberg, technical advisory board chairman for Skybox and former director of Goddard Space Flight Center. “The convergence of launch opportunities, computing technologies and Skybox’s Silicon Valley approach to aerospace enables the company to innovate more rapidly than other players in the industry.”

The satellite will launch alongside the Meteor-M weather satellite from the Baikonur space center in Kazakhstan. It will be a copy of Skybox’s first satellite, SkySat-1, planned for launch in 2013 aboard a Dnepr launch vehicle.

Skybox Imaging (Skybox) provides global customers easy access to reliable and frequent high-resolution images of the Earth by designing and building microsatellites and cloud services. By operating the world’s first coordinated microsatellite constellation, Skybox aims to empower commercial and government customers to make more informed, data-driven decisions that will improve the profitability of companies and the welfare of societies around the world. Founded in Silicon Valley in 2009, Skybox is backed by leading venture firms and comprised of internet and aerospace professionals. For more information, visit www.skybox.com.