By SpaceRef Editor
July 9, 2009
Filed under Astrophysics, Stanford University, US

Image: This computer-simulated image shows the formation of two high density regions (yellow) in the early universe, approximately 200 million years after the Big Bang. The cores are separated by about 800 times the distance between the Earth and the Sun, and are expected to evolve into a binary–or “twin”–star system.(Image and simulation courtesy of Ralf Kaehler, Matthew Turk and Tom Abel.)

Menlo Park, Calif.–The earliest stars in the universe formed not only as individuals, but sometimes also as twins, according to a paper published today in Science Express. By creating robust simulations of the early universe, astrophysicists Matthew Turk and Tom Abel of the Kavli Institute for Particle Astrophysics and Cosmology, located at the Department of Energy’s SLAC National Accelerator Laboratory, and Brian O’Shea of Michigan State University have gained the most detailed understanding to date of the formation of the first stars.

“We used to think that these stars formed by themselves, but now we see from our computer simulations that sometimes they have siblings,” said Turk. “These stars provide the seeds of next generation star formation, so by understanding them we can better understand how other stars and galaxies formed.”

To make this discovery, the researchers created an extremely detailed computer simulation of early star formation. Into this virtual universe they sprinkled primordial gas and dark matter as it existed soon after the Big Bang, data they obtained from observations of the cosmic microwave background. This mostly uniform radiation–a faint glow of radio waves spread across the entire sky–contains subtle variations that reflect the beginning of all structure in the universe.

Turk, Abel and O’Shea ran five data-intensive simulations, each of which covered a 400 quadrillion cubic mile volume of the universe and took about three weeks to run on 64 processors. The simulations focused on the first Population III stars: massive, hot stars thought to have formed a mere several hundred million years after the Big Bang. 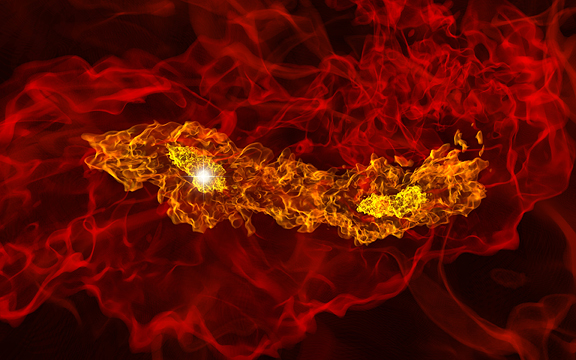 As the researchers watched their simulated universe evolve, waves of gas and dark matter swirled through the hot, dense universe. As the universe cooled, gravity began to draw the matter together into clumps. In areas rich with matter, stars began to form. And, in one out of the researchers’ five simulations, a single cloud of dust and dark matter formed into “twin” stars: one with a mass equivalent to about 10 suns, and one with a mass equivalent to about 6.3 suns. Both of them were still growing at the end of the calculation and will likely grow to many times that mass.

“We ran five of these calculations starting from the beginning of the universe, and to our surprise one of them was special,” said Abel. “This opens a whole new realm of research possibilities. These stars could evolve into two black holes, which could have created gravitational waves we could detect with an instrument like the Laser Interferometer Gravitational Wave Observatory and, if they fall into bigger black holes, for the Laser Interferometer Space Antenna. Or one of the stars could evolve into a black hole that could create gamma-ray bursts that we could detect with the Swift mission and the Fermi Gamma-ray Space Telescope.”

Turk added: “This will help us fine-tune our models for how structure in the universe formed and evolved. Understanding the very early stars helps us understand what we see today. It even helps explain how and when some of the atoms now on earth and in our bodies were first formed.”

The Kavli Institute for Particle Astrophysics and Cosmology, initiated by a grant from Fred Kavli and the Kavli Foundation, is a joint institute of Stanford University and SLAC National Accelerator Laboratory.

SLAC is a multi-program laboratory exploring frontier questions in astrophysics, photon science, particle physics and accelerator research. Located in Menlo Park, California, SLAC is operated by Stanford for the U.S. Department of Energy Office of Science.