Scientists Toast the Discovery of Vinyl Alcohol in Interstellar Space

Astronomers using the National Science Foundation’s 12 Meter Telescope
at Kitt Peak, AZ, have discovered the complex organic molecule vinyl
alcohol in an interstellar cloud of dust and gas near the center of the
Milky Way Galaxy. The discovery of this long-sought compound could
reveal tantalizing clues to the mysterious origin of complex organic
molecules in space. 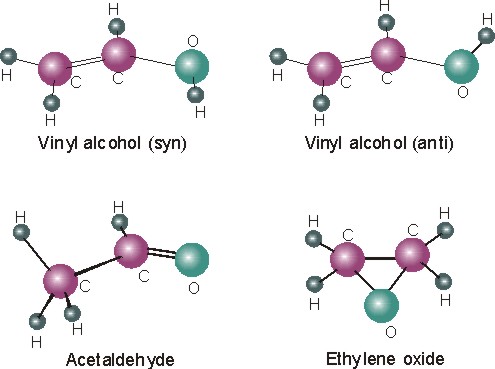 “The discovery of vinyl alcohol is significant,” said Barry Turner, a
scientist at the National Radio Astronomy Observatory (NRAO) in
Charlottesville, Va., “because it gives us an important tool for
understanding the formation of complex organic compounds in interstellar
space. It may also help us better understand how life might arise
elsewhere in the Cosmos.” Vinyl alcohol is an important intermediary in
many organic chemistry reactions on Earth, and the last of the three
stable members of the C2H4O group of isomers
(molecules with the same atoms, but in different arrangements) to be
discovered in interstellar space.

Turner and his colleague A. J. Apponi of the University of Arizona’s
Steward Observatory in Tucson detected the vinyl alcohol in Sagittarius
B — a massive molecular cloud located some 26,000 light-years from Earth
near the center of our Galaxy. The astronomers were able to detect the
specific radio signature of vinyl alcohol during the observational
period of May and June of 2001. Their results have been accepted for
publication in the Astrophysical Journal Letters.

Of the approximately 125 molecules detected in interstellar space,
scientists believe that most are formed by gas-phase chemistry, in which
smaller molecules (and occasionally atoms) manage to “lock horns” when
they collide in space. This process, though efficient at creating
simple molecules, cannot explain how vinyl alcohol and other complex
chemicals are formed in detectable amounts.

For many years now, scientists have been searching for the right
mechanism to explain how the building blocks for vinyl alcohol and other
chemicals are able to form the necessary chemical bonds to make larger
molecules – those containing as many as six or more atoms. “It has been
an ongoing quest to understand exactly how these more complex molecules
form and become distributed throughout the interstellar medium,” said
Turner.

Since the 1970s, scientists have speculated that molecules could form on
the microscopic dust grains in interstellar clouds. These dust grains
are thought to trap the fast-moving molecules. The surface of these
grains would then act as a catalyst, similar to a car’s catalytic
converter, and enable the chemical reactions that form vinyl alcohol and
the other complex molecules. The problem with this theory, however, is
that the newly formed molecules would remain trapped on the dust grains
at the low temperature characteristic of most of interstellar space, and
the energy necessary to “knock them off” would also be strong enough to
break the chemical bonds that formed them.

“This last process has not been well understood,” explained Turner. “The
current theory explains well how molecules like vinyl alcohol could
form, but it doesn’t address how these new molecules are liberated from
the grains where they are born.”

To better understand how this might be accomplished, the scientists
considered the volatile and highly energetic region of space where these
molecules were detected. Turner and others speculate that since this
cloud lies near an area of young, energetic star formation, the energy
from these stars could evaporate the icy surface layers of the grains.
This would liberate the molecules from their chilly nurseries,
depositing them into interstellar space where they can be detected by
sensitive radio antennas on Earth.

Astronomers are able to detect the faint radio signals that these
molecules emit as they jump between quantum energy states in the act of
rotating or vibrating.

Turner cautions, however, that even though this discovery has shed new
light on how certain highly complex species form in space, the final
answer is still not in hand.

“Although vinyl alcohol and its isomeric partners may well have formed
on grains,” said Turner “another important possibility has been found.
The grain evaporative processes near star formation appear to release
copious amounts of somewhat simpler molecules such as formaldehyde
(H2CO) and methanol (CH3OH), which may be reacting
in the gas phase to produce detectable amounts of vinyl alcohol and its
isomers.” A program to search for other families of isomers is planned,
which the astronomers believe could distinguish between these two
possibilities.

The astronomers used 2- and 3-mm band radio frequencies to make their
observations with the 12 Meter Telescope. This telescope was taken
off-line by the NRAO to make way for the
Atacama Large Millimeter Array,
and is now operated by the Steward Observatory of the University of
Arizona. Built in 1967, the telescope has had a long and productive
history in detecting molecules in space.

The
National Radio Astronomy Observatory is a facility of the
National Science Foundation, operated
under cooperative agreement by
Associated Universities, Inc.