The prospects for life in the Universe just got sweeter, with the
first discovery of a simple sugar molecule in space. The discovery
of the sugar molecule glycolaldehyde in a giant cloud of gas and
dust near the center of our own Milky Way Galaxy was made by scientists
using the National Science Foundation’s 12 Meter Telescope, a radio
telescope on Kitt Peak, Arizona.

“The discovery of this sugar molecule in a cloud from which new stars
are forming means it is increasingly likely that the chemical precursors
to life are formed in such clouds long before planets develop around the
stars,” said Jan M. Hollis of the NASA Goddard Space Flight Center in
Greenbelt, MD. Hollis worked with Frank J. Lovas of the University of
Illinois and Philip R. Jewell of the National Radio Astronomy Observatory
(NRAO) in Green Bank, WV, on the observations, made in May. The
scientists have submitted their results to the Astrophysical
Journal Letters.

“This discovery may be an important key to understanding the formation
of life on the early Earth,” said Jewell. Conditions in interstellar
clouds may, in some cases, mimic the conditions on the early Earth, so
studying the chemistry of interstellar clouds may help scientists
understand how bio-molecules formed early in our planet’s history. In
addition, some scientists have suggested that Earth could have been
“seeded” with complex molecules by passing comets, made of material
from the interstellar cloud that condensed to form the Solar System.

Glycolaldehyde, an 8-atom molecule composed of carbon, oxygen and
hydrogen, can combine with other molecules to form the more-complex
sugars Ribose and Glucose. Ribose is a building block of nucleic acids
such as RNA and DNA, which carry the genetic code of living organisms.
Glucose is the sugar found in fruits. Glycolaldehyde contains exactly
the same atoms, though in a different molecular structure, as methyl
formate and acetic acid, both of which were detected previously in
interstellar clouds. Glycolaldehyde is a simpler molecular cousin to
table sugar, the scientists say.

The sugar molecule was detected in a large cloud of gas and dust some
26,000 light-years away, near the center of our Galaxy. Such clouds,
often many light-years across, are the material from which new stars
are formed. Though very rarified by Earth standards, these interstellar
clouds are the sites of complex chemical reactions that occur over
hundreds of thousands or millions of years. So far, about 120
different molecules have been discovered in these clouds. Most of
these molecules contain a small number of atoms, and only a few molecules
with eight or more atoms have been found in interstellar clouds. 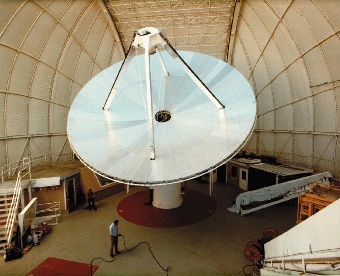 “Finding glycolaldehyde in one of these interstellar clouds means that
such molecules can be formed even in very rarified conditions,” said
Hollis. “We don’t yet understand how it could be formed there,” he
added. “A combination of more astronomical observations and theoretical
chemistry work will be required to resolve the mystery of how this molecule
is formed in space.”

“We hope this discovery inspires renewed efforts to find even more
kinds of molecules, so that, with a better idea of the total picture,
we may be able to deduce the details of the prebiotic chemistry
taking place in interstellar clouds,” Hollis said.

The discovery was made by detecting faint radio emission from the sugar
molecules in the interstellar cloud. Molecules rotate end-for-end, and
as they change from one rotational energy state to another, they emit
radio waves at precise frequencies. The “family” of radio frequencies
emitted by a particular molecule forms a unique “fingerprint” that
scientists can use to identify that molecule. The scientists identified
glycolaldehyde by detecting six frequencies of radio emission in what is
termed the millimeter-wavelength region of the electromagnetic spectrum
— a region between more-familiar microwaves and infrared radiation.

The NRAO 12 Meter Telescope used to detect the sugar molecule
has been a pioneer instrument in the detection of molecules in space.
Built in 1967, it made the first detections of dozens of the
molecules now known to exist in space, including the important first
discovery of carbon monoxide, now widely used by astronomers as a
signpost showing regions where stars are being formed. The 12 Meter
Telescope is scheduled to be closed at the end of July, in preparation
for the Atacama Large Millimeter Array, an advanced system
of 64 radio-telescope antennas in northern Chile now being developed by
an international partnership.

The giant molecular cloud, known as Sagittarius B2 (North),
as seen by the NSF’s Very Large Array (VLA) radio telescope in
New Mexico. This is the cloud in which scientists using the
12 Meter Telescope detected the simple sugar molecule
glycolaldehyde. This VLA image shows hydrogen gas in a region
nearly 3 light-years across. The 12 Meter Telescope studied this
region at much shorter wavelengths, which revealed the evidence of
sugar molecules. CREDIT: R. Gaume, M. Claussen, C. De Pree, W.M. Goss,
D. Mehringer, NRAO/AUI/NSF.