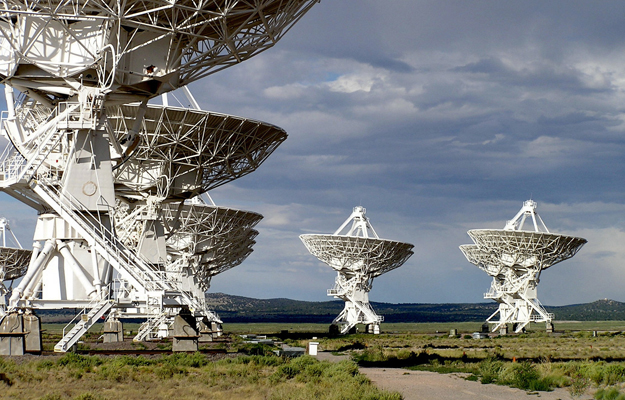 U.S. Naval Research Laboratory scientists from the Radio Astrophysics and Sensing Section of the Remote Sensing Division in conjunction with radio astronomers and engineers from the National Radio Astronomy Observatory (NRAO), Socorro, N.M., achieve “First Light” image, May 1, 2012, at frequencies below 1-gigahertz (GHz) on the Jansky Very Large Array (JVLA).

Through the combined expertise of NRL and NRAO scientists and engineers, a new, modern, wide-band receiver system has been developed and is being deployed onboard the JVLA to enable much more sensitive observations over a much broader frequency range extending from 50 megahertz to 500 megahertz (MHz).

“The use of over 100 megahertz of bandwidth in the first image is a dramatic illustration of the breakthrough to instantaneous wideband systems at frequencies below one gigahertz,” said Dr. Namir Kassim, section head, NRL Radio Astrophysics Section. “This represents a poorly explored part of the electromagnetic spectrum that is important for ionospheric and astrophysical research and to the Navy’s mission for navigation and communications.”

This demonstration of interferometric imaging is a key milestone. It is strong verification that the new receivers have the sensitivity, stability, and coherence critical to the needs of the international radio and space science communities, with key benefits for both astronomical and ionospheric science applications. Although not yet at full capability, by summer 2013 all 27 of the 25-meter telescopes of the JVLA will be outfitted with the new receivers.

In 2011, an upgrade to the receivers on the JVLA sacrificed the observatory’s capability for operation at VHF frequencies between 30 MHz and 300 MHz, a shortcoming for the JVLA but a decision made necessary by complex technical and fiscal constraints.

“The loss of low-frequency capability to the world’s most powerful radio telescope was a set-back not only to the radio research community, but to continued astrophysics and ionospheric work critical to the needs of Navy communications and navigation,” says Dr. Tracy Clarke, NRL radio astronomer. “With the new greatly improved receivers and the demonstration that they work well with the JVLA, scientists are once again able to explore with greater veracity the low-frequency radio bands for high sensitivity astrophysics and high accuracy ionospheric research.”

This “First Light” image is a critical milestone on the way to outfitting all 27 of the 25-meter dishes of the JVLA with the new low frequency capability. This map of the radio sky at 337 MHz taken May 1, 2012, by the five Very Large Array (JVLA) 25m telescopes presently outfitted with the new NRL/NRAO developed <1 GHz receivers. Although showing only 5 relatively bright radio sources, the sky map represents a significant milestone in the development of new capability for the JVLA radio telescope. At present, the lack of detailed understanding of the structure of the ionosphere has been a major limiting factor in the ultimate accuracy of GPS measurements, even in times of a relatively quiet ionosphere. This new capability will open previously, poorly explored regions of the electromagnetic spectrum to astrophysical and ionospheric communities, providing high-resolution images of celestial radio emitters and subsequently opening a new area of ionospheric physics, modeling, and prediction. The Very Large Array (VLA) radio astronomy observatory — renamed in 2012 for American physicist and radio engineer, Karl Guthe Jansky, who in 1931 discovered radio waves emanating from the Milky Way — is considered the largest and most capable radio telescope in the world and is funded under cooperative agreement between the National Science Foundation (NSF) and Associated Universities, Inc. (AUI). In the 1980s, collaboration between NRL and NRAO helped develop the 330 MHz Very Large Array system that has been widely and successfully used in astrophysics and ionospheric science for many years. In the 1990s, NRL, again working closely with NRAO, developed and deployed a narrow band receiver system operating at 74 MHz, so called the ‘4-band’ system for its operating wavelength of nearly 4 meters. While the 4-band system served the international astrophysics and ionospheric communities well for more than 10 years, by the 2000s, the VLA was sorely in need of an upgrade. NRL and NRAO scientists, together with the JVLA’s broad international users community are understandably enthusiastic about this newly restored and greatly improved capability becoming fully operational in the coming year.