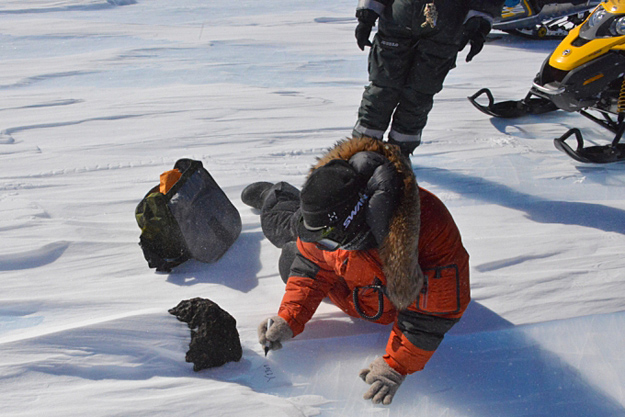 A team of scientists working at Princess Elisabeth Antarctica have recently discovered a meteorite weighing 18kg embedded in the East Antarctic ice sheet, the largest such meteorite found in the region since 1988.

The eight members of the SAMBA project, from Universite Libre de Bruxelles (ULB) and Vrije Universiteit Brussel (VUB), Japan’s National Institute of Polar Research (NIPR) and Tokyo University were searching for meteorites scattered across the Nansen Ice Field on January 28, when they found the 18kg ordinary chondrite. The team discovered a total of 425 meteorites, with a total weight of 75kg during the 40 day expedition, at an altitude of 2,900m, 140km south of Belgium’s Princess Elisabeth Antarctica research base.

“This meteorite was a very unexpected find for us, not only due to its weight, but because we don’t normally find such large meteorites in Antarctica”, said Vinciane Debaille, a geologist from Universite Libre de Bruxelles, who led the Belgian team during the expedition “This is the biggest meteorite found in East Antarctica for 25 years, so it’s a very special discovery for us, only made possible by the existence and location of Princess Elisabeth Antarctica.”

The SAMBA project contributesto the US and Japan-led global collection of Antarctic meteorites, and is an initiative of VUB and ULB, in collaboration with the Japanese Institute of Polar Research. SAMBA is supported by the Belgian Science Policy (BELSPO) and the International Polar Foundation.

Initial field analysis by the scientists suggests that the 18kg meteorite is an ordinary chondrite, the most abundant kind of meteorite. The fusion crust – the meteorite’s outer casing – was eroded, allowing the scientists to inspect the rock underneath. The meteorite is currently undergoing a special thawing process in Japan – to ensure water doesn’t get inside the rock – but will be brought to Belgium in the future.

“We study meteorites in order to better understand how the solar system formed, how it evolved, how the Earth became such a unique planet in our solar system”, said Debaille. “This season’s SAMBA mission was a success both in terms of the number and weight of the meteorites we found. Two years ago, we found less than 10kg. This year, we found so much that we had to call the travel agency – because we had 75kg of meteorites to take home”.

“Both Princess Elisabeth Antarctica and the International Polar Foundation are proud to support the research work of the Belgian and Japanese meteorite team”, said expedition leader Alain Hubert. “By providing solid logistics and field accomodation solutions to scientists working on the ice, we can ensure they can concentrate on what they have come to Antarctica to achieve: unlocking of Nature’s mysteries and broadening understanding of our planet”.

To find out more about science at Princess Elisabeth Antarctica and life in the frozen south, visit Inside the Station http://www.insidethestation.be – an interactive exhibition that takes visitors on a journey inside Belgium’s zero emission polar research centre – currently taking place at Tour & Taxis, Brussels.

* Total meteorites found in Antarctica only: 38,537

* Among Antarctic meteorites, only 30 have a mass greater than 18 kg. The 18kg meteorite has the fifth largest mass ever discovered in East Antarctica (Dronning Maud Land), and is the first of this size found in the area since 1988.