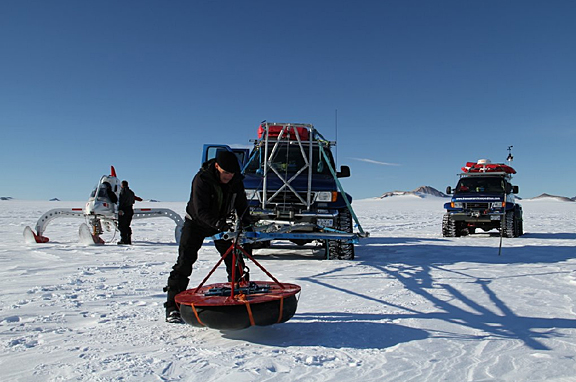 A team of explorers and scientists have today completed the first there-and-back crossing of Antarctica in wheeled vehicles. The 10-man team of the Moon Regan Transantarctic Expedition arrived back at Union Glacier in the early hours of Friday 17 December, 20 days after setting off from the same point to cross the continent.

Travelling in a one-man biofuelled ice vehicle on skis and two six-wheel drive science support vehicles, they set a record time for traversing Antarctica in vehicles when they reached the Ross Ice Shelf on December 9th, before retracing their tracks to their starting point. They covered a total distance of around 4,000 kilometres.

Imperial College London is the scientific partner of the expedition, and Ray Thompson from the Winston Wong Centre for Bio-Inspired Technology at Imperial’s Institute of Biomedical Engineering is among the voyagers. The explorers have used wireless sensor technology developed at Imperial to monitor the environment, the vehicles, and their own bodies.

On the expedition blog, team member Jamie Bligh explained that they had been motivated by wanting to show how new technology might improve access to Antarctica.

“We hope that the scientific data we have collected will provide a legacy for research and work at Imperial College, and beyond,” he wrote. “With the right checks and controls, and with the help of organisations like the FCO [Foreign & Commonwealth Office], we can find the right balance between accessing this incredible continent and protecting its splendour.”

The team have collected data on a variety of subjects, including meteorites, the snow surface, solar radiation, and wind turbulence. Scientists at Imperial will analyse the data, and expect to report their findings around Easter 2011.

“We have some sincere ‘thank yous’ to say at this moment,” the team said in a message upon completion of their journey. “Our main sponsor, Professor Winston Wong, has believed in our abilities and shared our objectives from the first – we owe him a huge debt of gratitude. A large number of people at Imperial College London have given our expedition significant support and overwhelming enthusiasm. Our particular thanks go to the Rector, Sir Keith O’Nions, and to Professor Chris Toumazou, who led our science partnership with Imperial. We also share this achievement with all our sponsors, family and friends.”