By SpaceRef Editor
February 7, 2005
Filed under Committee on Science, Space, and Technology Democratic Caucus, US

(Washington, DC) Today, the Administration released its budget request for Fiscal Year 2006. A quick review of the requests for civilian science agencies shows that the budget is every bit as devastating as the Science Committee Democrats predicted. Basic research received a $320 million decrease and applied research funding is flat. The federal science and technology budget decreased by $877 million and included cuts to manufacturing technology research, eliminated the Hubble servicing mission and cut K-12 science and math education.

Last week, Science Committee Democrats correctly predicted these declines, despite the Director of the Office of Science and Technology Policy’s (OSTP) testimony before the House Science Committee that “this Administration understands that science and technology are major drivers of economic growth.” Science Committee Democrats cautioned that Dr. Marburger’s kind words would not match up to the Administration’s budget reality.
As Rep. Bart Gordon (D-TN), ranking member on the Science Committee, commented last week “we can’t take kind words to the bank.” Today Gordon added, “This budget ignores our future economic needs and will cause irreparable harm to our country’s ability to compete in the increasingly sophisticated and competitive global market place.”

In real terms, the budget produced by the Administration today means that on a daily basis ‘blockbuster’ experiments cannot be performed, future Albert Einsteins are not being taught math and science, and the next ideas for breakthroughs in medical imaging techniques are gathering dust on a shelf. “In the current fiscal crisis we must prioritize,” added Gordon. “However, when we fail to put job creation, life-saving technologies and students’ studies near the top of our list we send the wrong message to the world. The priorities in this budget are not merely harmful, they push this country on a downward slide to losing our global science and technological edge.”

NIST: Although we have not seen the official documentation, it has been reported that $535.9 million was requested — a 23.8% reduction from the FY2005 appropriation of $703 million. ATP was slated for elimination (again) and MEP was severely cut to $46.8 million. The Administration continues budget gimmicks by not including close-out costs for ATP. Close-out costs for ATP personnel are estimated to be between $12-18 million and close-out costs for existing ATP projects would be $43.2 million — a very real blow for job creation in America.

DOE: Energy programs budget request is $2.6 billion, $100 million more than the 2005 appropriation. Energy Efficiency programs are reduced approximately 4%; Nuclear Energy Science and Technology up 2%; Electric Transmission and Distribution down 20%; and Fossil Energy up 18%. However, the Oil and Gas programs in Fossil Energy are being terminated.
The Office of Science budget request is essentially flat for FY2006 at $3.5 billion. Basic Energy Sciences is up approximately 3.7%; Advanced Scientific Computing down 11%; High Energy Physics down 3%; Fusion Energy up 5%; Biological and Environmental Research down 22%; Nuclear Physics, down 8%; and the balance of the program, down 4%.

NASA: NASA’s budget would increase relative to FY2005, but the Administration is seeking $546 million less than it said would be necessary for its programs in FY2006. In fact, the Administration is cutting last year’s budgetary plan for NASA through FY 2009 by a total of more than $1.7 billion. Funding for servicing the highly productive Hubble Space Telescope is eliminated. Funding for aeronautics R&D is cut again and will continue to decline throughout the remainder of the decade. The Jupiter Icy Moons Orbiter (JIMO) mission is effectively cancelled. Funding for the “Earth-Sun System” (the combined Earth Science and Sun-Earth Connections programs) is cut in FY 06. Impact of the proposed cuts and restructuring of NASA’s programs on NASA’s workforce and facilities is still TBD, but potentially quite significant.

Analysis of the Administration’s budget will continue for the next several days – in part because some of the agencies have not fully released their budget details. In addition to this year’s request, below are details from past budget requests and funding that Ranking Member Bart Gordon has compiled as a reference for interpreting the Administration’s FY2006 budget request (Table 1 and 2, below).

“Make no mistake, this is a race. Having a lead in science and technology will not last for the U.S. if we allow ourselves to slow down or, as this budget suggests, stop running. If we stop running at the top speed we can manage, we will lose,” concluded Gordon. “This budget is not the top speed we can manage. I will work with my colleagues on both sides of the aisle to try to realign this Administration’s spending priorities to better meet our immediate science and technology needs while guarding our future fiscal prosperity.”

Tables 5-2 and 5-3 are taken from the Analytical Perspectives portion of the FY2006 Budget. 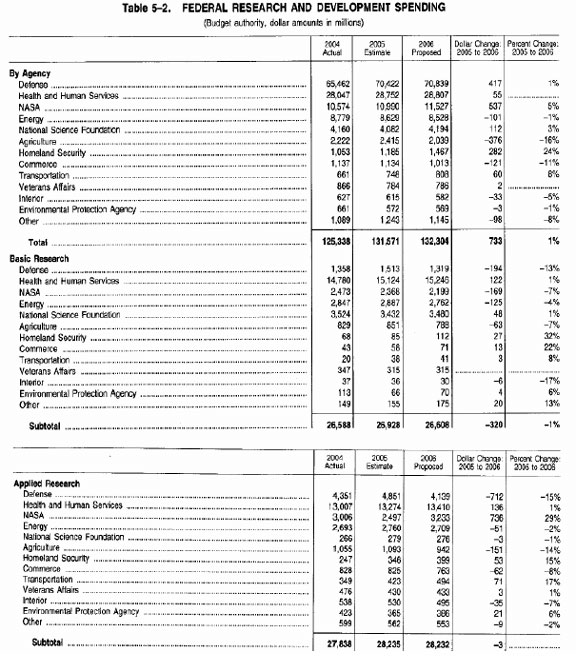 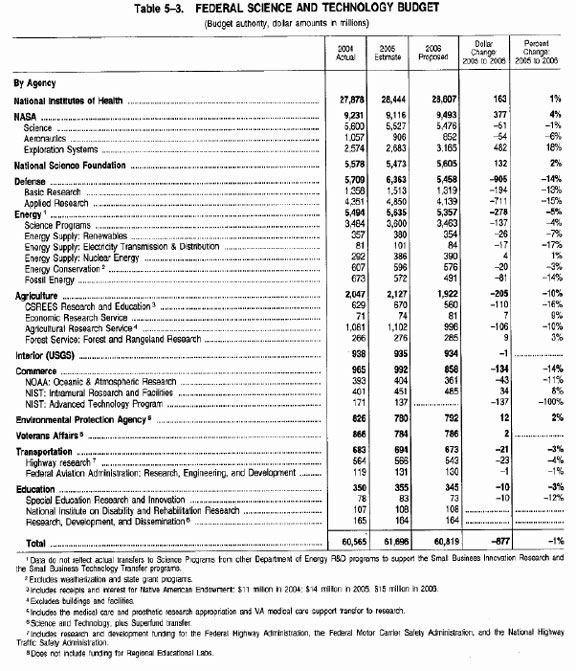 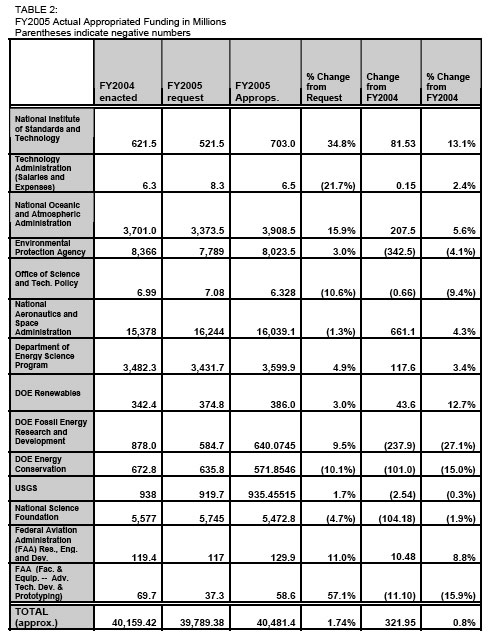