With shimmering pinks, hues of gray and a hint of brown, a newly
released image of Saturn’s rings resembles a fresco where nature is
the painter. The Cassini spacecraft captured this exquisite natural
color view a few days before entering orbit around Saturn.

The images that make up this composition were obtained from Cassini’s
vantage point beneath the ring plane with the narrow angle camera on
June 21, 2004. The image was taken at a distance of 6.4 million
kilometers (4 million miles) from Saturn. 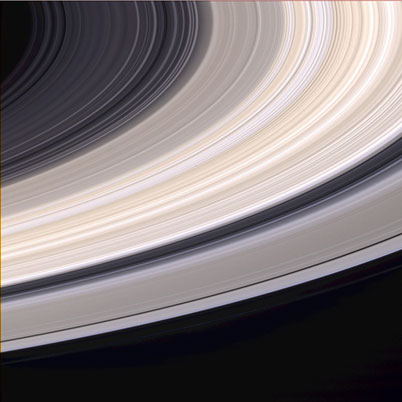 The brightest part of the rings, curving from the upper right to the
lower left in the image, is the B ring. Many bands throughout the B
ring have a pronounced sandy color. Other color variations across the
rings can be seen. Color variations in Saturn’s rings have previously
been seen in Voyager and Hubble Space Telescope images. Cassini images
show that color variations in the rings are more distinct in this
viewing geometry than they are when seen from Earth.

Saturn’s rings are made primarily of water ice. Since pure water ice
is white, it is believed that different colors in the rings reflect
different amounts of contamination by other materials, such as rock or
carbon compounds. In conjunction with information from other Cassini
instruments, Cassini images will help scientists determine the
composition of Saturn’s ring system.

In the 1980s, two Voyager spacecraft flew by Saturn as did Pioneer 11
in 1979. Those fly-by missions raised tantalizing questions that can
now be addressed by Cassini’s planned four year tour. Scientists have
waited 25 years for an opportunity to answer these questions.

The Cassini-Huygens mission is a cooperative project of NASA, the
European Space Agency and the Italian Space Agency. The Jet Propulsion
Laboratory, a division of the California Institute of Technology in
Pasadena, manages the Cassini-Huygens mission for NASA’s Office of
Space Science, Washington, D.C. The Cassini orbiter and its two
onboard cameras were designed, developed and assembled at JPL. The
imaging team is based at the Space Science Institute, Boulder, Colo.