Satellites Pinpoint Drivers of Urban Heat Islands in the Northeast 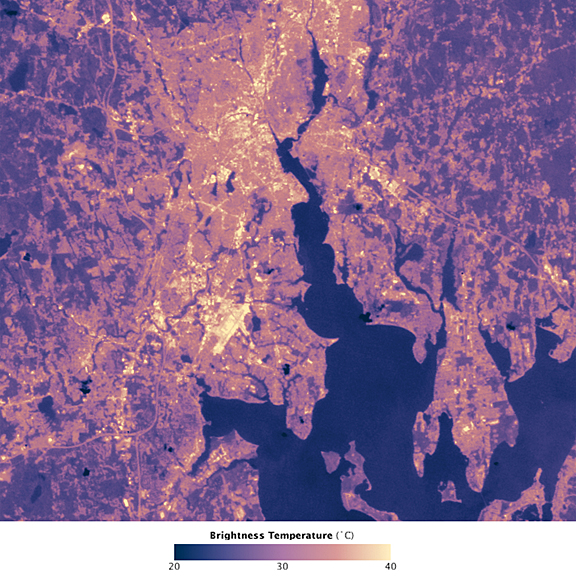 The size, background ecology, and development patterns of major northeastern cities combine to make them unusually warm, according to NASA scientists who presented new research today at an American Geophysical Union meeting, in San Francisco, Calif.

Summer land surface temperatures of cities in the Northeast were an average of 13*F to 16*F (7*C to 9*C) warmer than surrounding rural areas over a three year period, the new research shows. The complex phenomenon that drives up temperatures of cities such as Boston, Philadelphia, and Washington D.C. is called the urban heat island effect.

By comparing 42 cities in the Northeast, the researchers have demonstrated that a city’s development pattern can have a significant impact on the strength of a city’s heat island. They found that densely-developed cities with compact urban cores are more apt to produce strong urban heat islands than more sprawling, less intensely-developed cities.

The new research relating development patterns and heat islands is part of a broader effort by scientists at NASA’s Goddard Space Flight Center in Greenbelt, Md. to study urban heat islands all around the globe. By analyzing data from thousands of settlements, the Goddard team has pinpointed a set of key city characteristics that drive the development of strong heat islands.

“This, at least to our knowledge, is the first time that anybody has systematically compared the heat islands of a large number of cities at continental and global scales,” said Ping Zhang, a researcher at Goddard and the lead author of the research.

The largest cities, their analysis shows, usually have the strongest heat islands. Cities located in forested regions, such as the northeastern United States, also have stronger heat islands than cities situated in grassy or desert environments.

“The urban heat island is a relative measure comparing the temperature of the urban core to the surrounding area,” said Marc Imhoff, the leader of the NASA Goddard research group. “As a result, the condition of the rural land around the city matters a great deal.”

The method used to compare the cities, which the team of scientists has honed for about two years, involves the use of maps of impervious surface area produced by the United States Geological Survey-operated Landsat satellite, and surface temperature data from the Moderate-resolution Imaging Spectroradiometer (MODIS), an instrument aboard NASA’s Aqua and Terra satellites.

Development produces heat islands by replacing vegetation, particularly forests, with pavement, buildings, and other infrastructure. This limits plant transpiration, an evaporative process that helps cool plant leaves and results in cooler air temperatures, explained Robert Wolfe, one of the Goddard scientists who conducted the new research.

For more information about this topic, please visit this page: http://www.nasa.gov/topics/earth/features/heat-island-sprawl.html