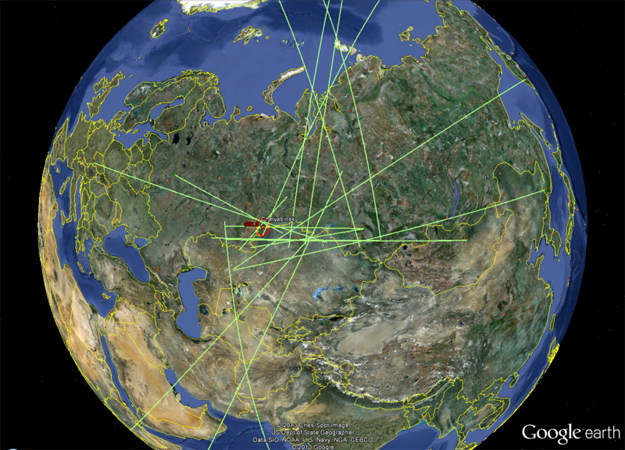 17 infrasound stations in the CTBTO’s network detected the infrasonic waves from the meteor that broke up over Russia’s Ural mountains.

Infrasonic waves from the meteor that broke up over Russia’s Ural mountains last week were the largest ever recorded by the CTBTO’s International Monitoring System. Infrasound is low frequency sound with a range of less than 10 Hz. The blast was detected by 17 infrasound stations in the CTBTO’s network, which tracks atomic blasts across the planet. The furthest station to record the sub-audible sound was 15,000km away in Antarctica.

The origin of the low frequency sound waves from the blast was estimated at 03:22 GMT on 15 February 2013. People cannot hear the low frequency waves that were emitted but they were recorded by the CTBTO’s network of sensors as they travelled across continents. 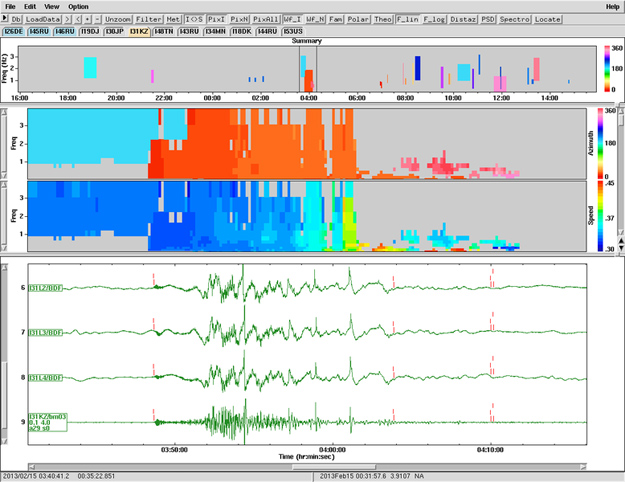 A visual representation of the infrasound waves and computer attributes by the CTBTO’s International Data Centre, from the fireball recorded by the CTBTO station in Kazakhstan.

“We saw straight away that the event would be huge, in the same order as the Sulawesi event from 2009. The observations are some of the largest that CTBTO’s infrasound stations have detected,” CTBTO acoustic scientist, Pierrick Mialle said.

Until last week, the bolide explosion above Sulawesi, Indonesia, in October 2009 was the largest infrasound event registered by 15 stations in the CTBTO’s network.

Infrasound has been used as part of the CTBTO’s tools to detect atomic blasts since April 2001 when the first station came online in Germany. Data from the stations is sent in near real time to Vienna, Austria, for analysis at the CTBTO’s headquarters. Both the raw and analysed data are provided to all Member States.

Listen to the audio files of the infrasound recording after it has been filtered and the signal accelerated.

“We know it’s not a fixed explosion because we can see the change in direction as the meteorite moves towards the earth. It’s not a single explosion, it’s burning, traveling faster than the speed of sound. That’s how we distinguish it from mining blasts or volcanic eruptions.

“Scientists all around the world will be using the CTBTO’s data in the next months and year to come, to better understand this phenomena and to learn more about the altitude, energy released and how the meteor broke up,” Mialle said.

The infrasound station at Qaanaaq, Greenland — featured in this video — was among those that recorded the meteor explosion in Russia. There are currently 45 infrasound stations in the CTBTO’s network that measure micropressure changes in the atmosphere generated by infrasonic waves. Like meteor blasts, atomic explosions produce their own distinctive, low frequency sound waves that can travel across continents (see how).

Infrasound is one of four technologies (including seismic, hydroacoustic and radionuclide) the CTBTO uses to monitor the globe for violations of the Comprehensive Nuclear-Test-Ban Treaty that bans all nuclear explosions.

Seismic signals from the meteor were also detected at several Kazakh stations close to the explosion and impact area. Listen to the audio files of the infrasound recording after it has been filtered and the signal accelerated.

Days before the meteor on 12 February 2013, the CTBTO’s seismic network detected an unusual seismic event in the Democratic People’s Republic of Korea (DPRK), which measured 4.9 in magnitude. Later that morning, the DPRK announced that it had conducted a nuclear test. The event was registered by 94 seismic stations and two infrasound stations in the CTBTO’s network. The data processing and analysis are designed to weed out natural events and focus on those events that might be explosions, including nuclear explosions.

For further information on the CTBT, please see www.ctbto.org – your resource on ending nuclear testing,
or contact: