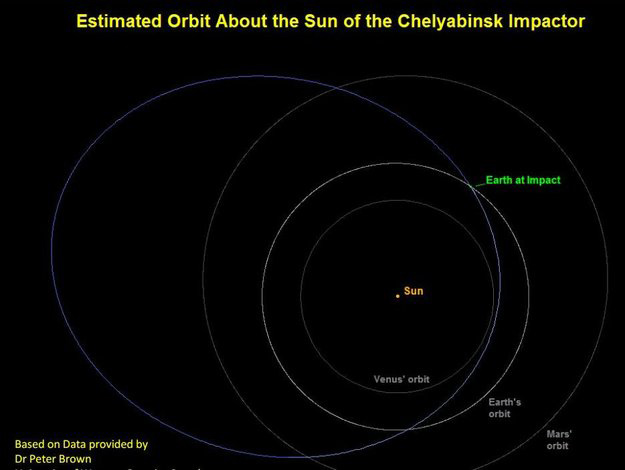 The estimated orbit around the Sun of the Chelyabinsk object. It illustrates the orbits of Venus, Mars and Earth, together with the Sun and Earth at impact. The illustration is based on data provided by Dr Peter Brown.

The first firm details of the 15 February asteroid impact in Russia, the largest in more than a century, are becoming clear. ESA is carefully assessing the information as crucial input for developing the Agency’s asteroid-hunting effort.

At 03:20 GMT on 15 February, a natural object entered the atmosphere and disintegrated in the skies over Chelyabinsk, Russia.

Extensive video records indicate a northeast to southwest path at a shallow angle of 20* above the horizontal. The entry speed is estimated at around 18 km/s – more than 64 000 km/h.

According to calculations by Peter Brown at the University of Western Ontario, Canada, drawing on extremely low-frequency sound waves detected by a global network, the object is estimated to have been about 17 m across with a mass of 7000-10 000 tonnes when it hit atmosphere.

It exploded with a force of nearly 500 kilotons of TNT – some 30 times the energy released by the Hiroshima atomic bomb – around 15-20 km above the ground.

With our current understanding of near-Earth objects, events of this magnitude are expected once every several of tens to 100 years.

Nicolas Bobrinsky, Head of ESA’s Space Situational Awareness (SSA) programme, and Detlef Koschny, responsible for the programme’s Near-Earth Object activity, responded to questions about the event. Was this event related to the predictedflyby of asteroid 2012 DA14, which passed Earth at 19:27 GMT that same day at just 28 000 km?

DVK: The trajectory, the location of ent ry into the atmosphere and the large time separation between the two events indicate that the Russian object was unrelated to 2012 DA14.

What caused the damage on the ground? Did pieces hit people or buildings?

DVK: Many media reported that an airburst caused window breakage and some structural damage in downtown Chelaybinsk. Normally, some damage begins to occur at around five times normal air pressure at sea level. Widespread window damage is expected around 10-20 times this value.

As the explosion and fireball progressed along a shallow trajectory, the cylindrical blast wave would have propagated directly to the ground and would have been intense.

The terminal part of the explosion probably likely occurred almost directly over Chelyabinsk. This was perhaps the single greatest contributor to the blast damage.

We are waiting for confirmation from the Russian authorities that pieces of the object – bits of meteorite – have been found in the region. We’re unaware of any media reports of anyone or any structure being hit by any debris from the object itself.