By SpaceRef Editor
May 31, 2013
Filed under Europe, Mars, University of Copenhagen 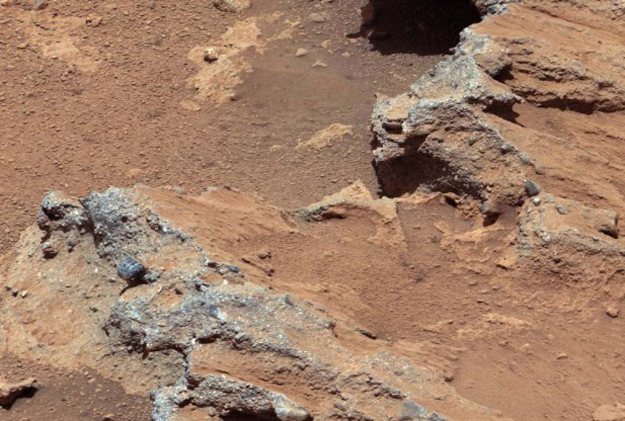 Observations by NASA’s Mars rover Curiosity have revealed areas with gravel and pebbles that are characteristic of a former riverbed. Researchers, including members of the Niels Bohr Institute, have analysed their shapes and sizes and the rounded pebbles clearly show that there has been flowing water on Mars. The results are published in the scientific journal, Science.

The Mars rover’s stereo camera took pictures of a few areas with densely packed pebbles, cemented together like concrete. The image field of an area named Hottah was a mosaic of approximately 1.4 meters x 80 centimeters. But when the picture is taken at an angle from the camera arm’s two meter high mast down towards the ground-level, it gives a slightly distorted view in which the size of the rocks depend on their location in the image frame. To remedy this, the researcher first had to process the image so the proportions are comparable.

“Next, we divided the image into smaller fields of 10 mm and analysed the gravel, which consists of coarse grains of sand around 1/3 mm. We examined the pebbles which are between 4 and 40 mm in greater detail. Altogether we made a thorough analysis of 515 pebbles”, explains Asmus Koefoed, a research assistant in the Mars Group at the Niels Bohr Institute at the University of Copenhagen.

When rocks are worn by the wind, they become angular and rough – similar to the result of sandblasting. When rocks are moving in flowing water, they are worn down in a completely different way. They tumble around in a mixture of water and sand bumping into each other and the corners and edges of the rocks eventually become smooth and rounded.

“We could see that almost all of the 515 pebbles we analysed were worn flat, smooth and round. We have classified them according to their geometry, which can be described using a single number – the ‘Corey shape factor’, where 0 describes rocks that are completely flat like a piece of paper and 1 means they are perfect spheres”, explains Asmus Koefoed.

There are both light and dark rocks in various shades and colours – much like the original rocks on Earth and Mars. Densely packed deposits were formed locally, which occur when fine sand and mud flow along with the gravel and pebbles. This all clumps together into something that can harden into a concrete-like substance, a conglomerate. The solid sediments have then subsequently been worn flat on the top by wind-borne sand particles that flowed past the conglomerate during events of very strong wind.

The new results are interesting because they tell us about the climate history of Mars. What would it take to cause the stones to look like they do?

“In order to have moved and formed these rounded pebbles, there must have been flowing water with a depth of between 10 cm and 1 meter and a flow rate of about 1 meter per second – or 3.6 km/h – slightly faster than a typical natural Danish stream,” explains Morten Bo Madsen, head of the Mars research group at the Niels Bohr Institute.

So it has not just been sporadic flowing water that evaporates quickly, but prolonged warmer periods where the streams were active. There was probably a higher atmospheric pressure on the planet than today, where the pressure is below about 1000 Pascal, about one percent of the Earth’s atmospheric pressure. This means that the planet must have had a denser atmosphere, which caused a greater surface pressure than today.

Mars has thus been a dynamic place, which would not have been totally inhospitable to life, as we know it on Earth. Apart from running water recent investigations with Curiosity have shown that there were a pH-neutral environment and minerals that microbial life could use for nourishment.

Curiosity has thus achieved one of its objectives, namely to investigate whether there are areas on Mars, which could have been habitable for microbial life.