By SpaceRef Editor
January 3, 2013
Filed under Astrophysics, Canada-France-Hawaii Telescope, US 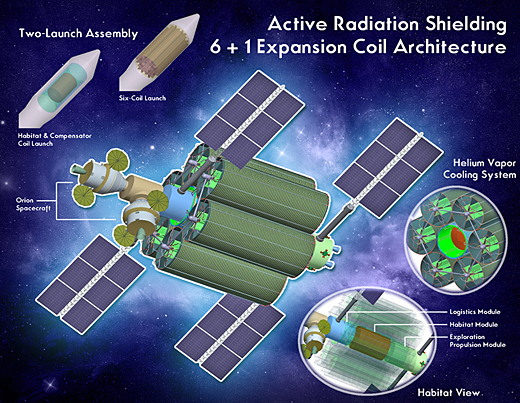 A new study of our nearest giant cosmic neighbor, the Andromeda galaxy, shows that more than half of its small, dwarf galaxy companions are aligned in a giant disk that appears to rotate around the bright host also known as Messier 31. The PAndAS (Pan-Andromeda Archaeological Survey) team used MegaCam on the Canada-France-Hawaii Telescope to conduct the survey, complemented by spectroscopic follow-ups with the W. M. Keck Observatory.

Large galaxies like Andromeda and our own Milky Way have long been known to be orbited by an entourage of smaller galaxies. These systems — that are individually anywhere from ten to at least hundreds of thousands times fainter that their bright hosts — were thought to trace a path around the big galaxy that was independent of every other dwarf. The fact that astronomers now see that a majority of these little systems in fact contrive to map out an immensely large — approximately one million light-years across — but extremely flattened structure, implies that this understanding is grossly incorrect. Either something about how these galaxies formed, or subsequently evolved, must have led them to trace out this peculiar, coherent, structure. While dwarf galaxies are not massive, they are the most numerous galaxy type in the universe, so understanding what this is expected to shed new insight into the formation of galaxies at all masses.

The study is based on the Pan-Andromeda Archaeological Survey (PAndAS), a large project undertaken between 2008 and 2011 with MegaCam on the Canada-France-Hawaii Telescope situated on the Mauna Kea volcano on the Big Island of Hawaii. It culminates many years of effort by an international team of scientists who have discovered a large number of the satellite galaxies, developed new techniques to measure their distances, and have used the Keck telescope with colleagues to measure their radial velocities. While earlier work had hinted at the existence of this structure, the new study has demonstrated its existence to a high level of statistical confidence (99.998%), and has revealed the coherent motion.

In the current theory of how galaxies form, the first galaxies form within large clumps of dark matter (what astronomers call “halos”). This dark matter is mysterious stuff: it is the dominant form of matter in the universe, and has not yet been directly detected, but its influence in galaxies is firmly established. These first galaxies must have been small, but over time giant galaxies like Andromeda and the Milky Way are thought to have evolved by cannibalizing their smaller neighbors. In this picture the dwarf galaxies that we see at the present day would be those ancient primordial galaxies that survived this ordeal. However, nowhere in this picture is there an explanation for why the surviving dwarfs should map out a large disk like we now see around our nearest neighbor. It appears that the smallest galaxies in the universe are intent on providing the biggest challenges to our understanding of galaxy formation.

“We don’t yet know where this is pointing us” said Rodrigo Ibata, lead author on the report. “It flies in the face of our ideas about galaxy formation, but it surely is very exciting.”