By SpaceRef Editor
May 30, 2010
Filed under National Institute of Standards and Technology (NIST), US

Make room, Bender, Rosie and R2D2! Your newest mechanical colleagues are a few steps closer to reality, thanks to lessons learned during two robotics events hosted by the National Institute of Standards and Technology (NIST) at the recent IEEE International Conference on Robotics and Automation (ICRA) in Anchorage, Alaska. The events–the Virtual Manufacturing Automation Competition (VMAC) and the Mobile Microrobotics Challenge (MMC)–were designed to prove the viability of advanced technologies for robotic automation of manufacturing and microrobotics.

In the first of two VMAC matches, contestants used off-the-shelf computer gaming engines to run simulations of a robot picking up boxes of various sizes and weights from a conveyor belt and arranging them on a pallet for shipping. The two teams in the competition–both from Georgia Tech University–showed that their systems were capable of solving mixed palletizing challenges. To do this, the system had to receive a previously unseen order list, create a logical plan for stacking and arranging boxes on a pallet to fulfill that order, and then computer simulate the process to show that the plan worked. Getting all of the boxes onto the pallet is relatively straightforward; however, creating a stable, dense pallet is a difficult challenge for a robot.

The second manufacturing contest “road tested” a robot’s mobility in a one-third scale factory environment. The lone participating team, the University of Zagreb (Croatia), demonstrated that it could successfully deliver packages simultaneously to different locations in the mock factory by controlling three robotic Automated Guided Vehicles (AGVs) at once.

In the microrobotics match-up, six teams from Canada, Europe and the United States pitted their miniature mechanisms–whose dimensions are measured in micrometers (millionths of a meter)–against each other in three tests: a two-millimeter dash in which microbots sprinted across a distance equal to the diameter of a pin head; a microassembly task inserting pegs into designated holes; and a freestyle competition showcasing a robot’s ability to perform a specialized activity emphasizing one or more of the following: system reliability, level of autonomy, power management and task complexity. 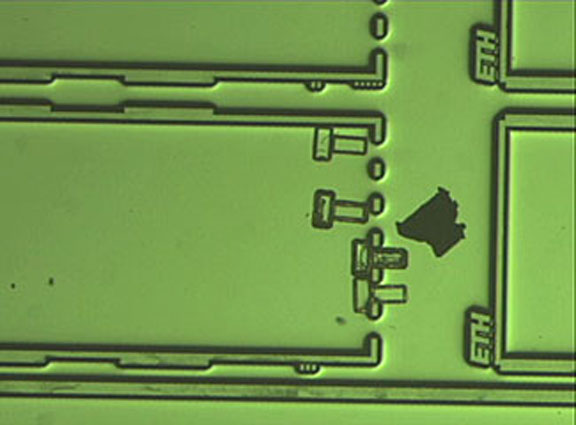 In a series of video clips, competition robots and pallet-stacking simulations show their moves. Video

In the two-millimeter dash, the microbot from Carnegie Mellon University broke the world record held by Switzerland’s ETH Zurich (the event also was part of earlier NIST-hosted “nanosoccer” competitions) with an average time of 78 milliseconds. However, the achievement was short-lived. Less than an hour later, the French team (representing two French research agencies: the FEMTO-ST Institute and the Institut des Systemes Intelligents et de Robotique, or ISIR) shattered the mark with an average time of 32 milliseconds.

ETH Zurich was the champion in the microassembly event with a perfect 12 for 12 score steering pegs approximately 500 micrometers long (about the size of a dust particle) into holes at the edge of a microchip. Runner-up was Carnegie Mellon whose microbot successfully placed 4 of 9 pegs.

ETH Zurich’s robot also captured the freestyle event, amazing spectators with its unprecedented ability to maneuver in three dimensions within a water medium. In fact, in one demonstration, the Swiss device “flew” over the edge of the microassembly field, reversed direction and pushed out the pegs it had inserted earlier. Taking second place in the freestyle event was the team from Carnegie Mellon that demonstrated how three microbots could be combined into a single system and then disassembled again into separate units. Third place in the event went to the microbot from the Stevens Institute of Technology.

NIST conducted the VMAC in cooperation with IEEE and Georgia Tech, and collaborated on the MMC with the IEEE Robotics and Automation Society. More events of this kind with evolving challenges are planned for the future, as robotics technologies mature. NIST will work with university and industry partners on these events with the goal of advancing skills that future robots–both full-size and micro-size–will need to carry out their functions.