By SpaceRef Editor
June 18, 2013
Filed under Ames Research Center, US 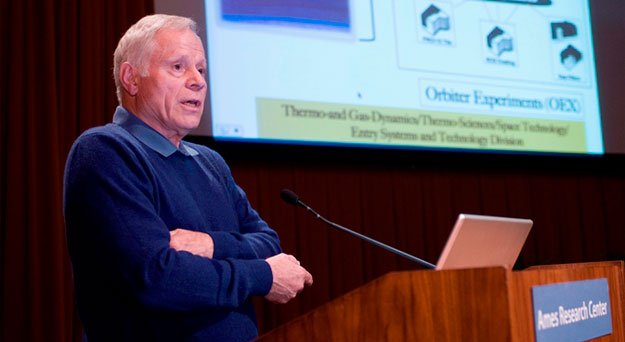 A retired NASA scientist, whose personal research and leadership helped revolutionize the technology that probed the planets of Jupiter, Venus and Mars, and brought back invaluable samples to Earth, today received an award for his work.

Arnold won the award in recognition of the depth and breath of his technical expertise in areas like aerothermodynamics, high temperature spectroscopy, computational chemistry, nanotechnology and thermal protection systems. In addition, during his management tenure as the chief of the Space Technology Division, he ensured the capabilities at the Ames Arc Jet Complex (a thermo-physics facility where gases are heated and expanded to very high temperatures and supersonic/ hypersonic speeds) and Ames Ballistic Range Complex (a testing facility where the aerodynamics of entry vehicles, including meteors and asteroids, are investigated) were fully optimized to contribute to the success of NASA, the European Space Agency (ESA) and Japanese (Hayabusa) missions.

“Among his many accomplishments, Arnold’s technical and management leadership and mentoring led to the success of a host of U.S. missions, including Mars Pathfinder, Mars Exploration Rover and Stardust comet sample return, ESA’s Huygens’ mission to Titan, and Japanese Hayabusa sample return missions,” said Ethiraj Venkatapathy, the chief technologist in the Entry Systems and Technology Division at Ames.

Al Seiff, for whom the award is named, spent most of his career at NASA Ames. His contributions to the fields of planetary exploration and planetary probe technology, as well as mentoring young scientists and researchers are legendary. His leadership using ballistic ranges and innovative engineering techniques played an important role in determining the aerodynamics and aerothermodynamics of the Apollo entry vehicle used to carry home our astronauts from the moon.

Arnold was hired by Seiff in 1962 upon graduating from the University of Kansas, Lawrence, with a degree in engineering physics. He was hired to work on Apollo’s aerothermodynamics.

Years later, both scientists collaborated on the Planetary Atmospheres Experiments Test (PAET). Seiff theorized that the response of an entry probe could determine the structure and composition of an unknown planetary atmosphere. PAET successfully proved this theory by allowing Seiff and his team to reconstruct Earth’s atmosphere. Arnold served as a co-investigator on PAET. “The success of PAET led to every probe mission since then, using this technique in constructing planetary atmosphere of Venus, Mars, Titan and Jupiter,” said Venkatapathy.

Arnold’s other key accomplishments include significantly contributing to the understanding of the shock layer for vehicles entering the atmospheres of Earth, Mars, Venus and Jupiter; developing a computer code that helped solve entry physics problems; and establishing computational chemistry as a discipline for NASA to study entry physics. Arnold also worked with Headquarter senior managers in 1984 to start supercomputing at Ames, which later became the basis for the Numerical Aerodynamic Simulator (NAS) project today.

The imprint of Arnold’s management and leadership is with us still today: The Thermo-physics Division at Ames, where he served as chief for 17 years, is the agency’s residual capability in the area of hypervelocity atmospheric flight, including thermal protection materials and systems, high enthalpy facilities (arcjets, shock tubes, and ballistic ranges) aerothermodynamics and computational chemistry. After 40 years in the civil service, Arnold retired from NASA in 2002.

Much of Arnold’s career was influenced by his first boss, life-long mentor and friend, Alvin Seiff.

“Jim Arnold’s passion for science and engineering is never-ending. He continues to mentor all generations and sees exploring space as an inter-generational effort,” said Venkatapathy.