Research reveals the real cause of death for some starburst galaxies

By SpaceRef Editor
November 13, 2014
Filed under Astrophysics, University of Kansas, US

LAWRENCE — Like hedonistic rock stars that live by the “better to burn out than to fade away” credo, certain galaxies flame out in a blaze of glory. Astronomers have struggled to grasp why these young “starburst” galaxies — ones that are very rapidly forming new stars from cold molecular hydrogen gas up to 100 times faster than our own Milky Way — would shut down their prodigious star formation to join a category scientists call “red and dead.”

Starburst galaxies typically result from the merger or close encounter of two separate galaxies. Previous research had revealed spouts of gas shooting outward from such galaxies at up to 2 million miles per hour. But astronomers lacked direct evidence of what expelled the gas, the fundamental ingredient for crafting new stars.

“To form stars you need dense gas,” said Gregory Rudnick, associate professor of physics and astronomy at the University of Kansas. “Most of the gas in the universe is made up of hydrogen and in very dense areas this gas is no longer formed of atoms but rather of molecules of hydrogen. When the gas gets dense enough and isn’t too hot, small portions of that gas can collapse to form stars. Without a lot of cool dense gas, around -420 to -280 degrees Fahrenheit, stars can’t form.” 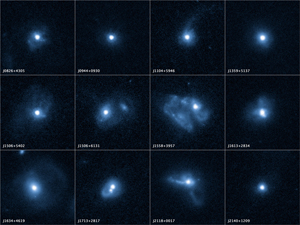 Now, Rudnick and a team of fellow astronomers have solved the mystery of why compact, young galaxies become galactic ruins. Using NASA’s Hubble Space Telescope and Chandra X-ray Observatory, they found that energy from the star formation itself created a shortage of gas within the starburst galaxies they studied, shutting down the potential for further crafting of stars. The group’s findings were published recently in the Monthly Notices of the Royal Astronomical Society.

“As the stars form, the most massive and hot ones emit enough light that the pressure of this light on the gas can push the gas out of the galaxy,” Rudnick said. “When these stars explode, the energy from these explosions can do the rest of the job and push most of the gas clear of the galaxy. We think we are witnessing such an occurrence.”

Rudnick and his fellow researchers analyzed 12 merging galaxies as the curtain fell on their star making. The team’s observations overturned an earlier idea that supermassive black holes, also known as “active galactic nuclei,” or AGN, were responsible for throwing gas from these starburst galaxies.

“One favored possibility for this was that the gas that fuels star formation was forcibly ejected from the galaxy over about tens of million years,” Rudnick said. “It was suspected that it had something to do with the presence of a supermassive black hole at the center of the galaxy. Just before gas enters a black hole, it can become extremely hot and literally cause a wind that can drive out the gas from the rest of the galaxy. While a possible cause of the blowout, there had been no direct evidence for this process in driving out the gas in these compact galaxies. Indeed, before our studies no one had ever even observed a compact galaxy exhibiting a strong wind and blowing out its gas.”

The findings suggest the same extreme condiitions that turn compact galaxies into prolific star-making machines also bring on the eventual demise of their star production. In other words, supermassive black holes, or AGN, aren’t to blame.

“There is so much star formation that it’s possible the energy from the star formation itself is able to stop the star formation,” said the KU researcher. “We originally thought these galaxies might have an accreting supermassive black hole that was causing the breakneck winds. This is because the speeds were so high and we had never seen star formation doing this effective of a job before at pushing a strong wind. This work surprisingly shows that supermassive black holes probably aren’t important in causing these outflows. This is important, as many studies of galaxy evolution have shown that these black holes may play a key role in regulating star formation in galaxies. What we’ve shown is these very vigorously star-forming and extremely compact galaxies don’t require a big black hole but can do the job via their star formation alone. Indeed, the star formation may be occurring at the fastest rate possible before shutting itself off. This is a galaxy that is pushing itself towards a shutdown. This will be an important element to include in future revisions of galaxy evolution models.”