By SpaceRef Editor
May 10, 2010
Filed under Earth, Polar Research, UNIVERSITY OF GEORGIA, US

In so many ways, Don Juan Pond in the Dry Valleys of Antarctica is one of the most unearthly places on the planet. An ankle-deep mirror between mountain peaks and rubbled moraine, the pond is an astonishing 18 times saltier than the Earth’s oceans and virtually never freezes, even in temperatures of more than 40 degrees below zero Fahrenheit.

Now, a research team led by biogeochemists from the University of Georgia has discovered at the site a previously unreported chemical mechanism for the production of nitrous oxide, an important greenhouse gas. Possibly even more important, the discovery could help space scientists understand the meaning of similar brine pools in a place whose ecosystem most closely resembles that of Don Juan Pond: Mars.

The research, published April 25 in the journal Nature Geoscience, adds an intriguing new variable to growing evidence that there has been–and may still be–liquid water on Mars, a usual prerequisite for the formation of life. In fact, the new findings could help space scientists develop sensors for detecting such brines on Mars–thus narrowing the search for places where life may exist. 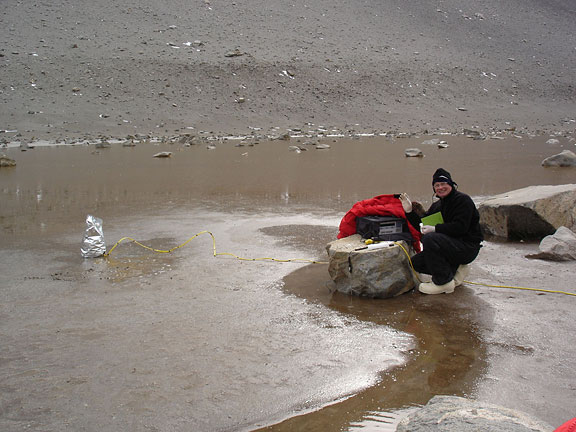 UGA research scientist Vladimir Samarkin and his colleagues measured the production of nitrous oxide, an important greenhouse gas, at Don Juan Pond in Antarctica and discovered at the site a previously unreported chemical mechanism for the production of this important greenhouse gas. The discovery could help space scientists understand the meaning of similar brine pools on Mars.

“The pond’s soils and brines and the surrounding rock types are similar to those found on Mars,” said Samantha Joye, a faculty member in the department of marine sciences in the Franklin College of Arts and Sciences and lead author on the paper. “So it provides an ideal location to assess microbial activity in extreme environments. While we did not detect any ‘bio-gases’ such as hydrogen sulfide and methane, we did, surprisingly, measure high concentrations of nitrous oxide, which is normally an indicator of microbial activity. We needed to find out whether a non-organic process could account for this nitrous oxide production.”

Other authors on the paper include Vladimir Samarkin, a research scientist, and Marshall Bowles, a graduate student, also of the department of marine sciences at UGA; Michael Madigan of Southern Illinois University; Karen Casciotti of the Woods Hole Oceanographic Institution; John Priscu of Montana State University; and Christopher McKay of the Ames Research Center of NASA.

The research was supported by grants from the National Science Foundation’s Antarctic Organisms and Ecosystems Program and the McMurdo Microbial Observatory Program.

Scientists have been fascinated with Don Juan Pond since its discovery in 1961. (While the site is lovely, there’s nothing romantic about the name, which comes from the helicopter pilots who first found it, Don Roe and John Hickey.) From the time of its discovery, researchers realized they had found a place like nowhere else on Earth. 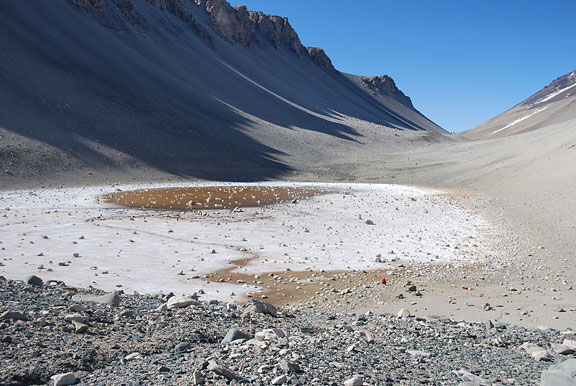 Don Juan Pond in Antarctica, a roughly 1,000- by 400-meter basin, is by far the saltiest body of water on Earth. The specks of red in this image are researchers who are dwarfed by the steep, rocky cliffs around them.

The pond, which is a roughly 1,000- by 400-meter basin, is the saltiest body of water on Earth by far, some eight times saltier than the Dead Sea. While researchers more than 30 years ago reported finding abundant and varied microflora of fungi, bacteria, blue-green algae and yeasts, since then and during the Joye team’s work, such life has been non-existent. Since the depth level and area covered by the pond (which is fed by hypersaline groundwater) have demonstrably varied over the years, this wasn’t unexpected. What did surprise the team was that even with no life-forms present, they were able to measure nitrous oxide, perhaps best known to most people as the “laughing gas” used in dental procedures. (The amounts measured in the air were beneath a level that could make a person light-headed or giddy, as “laughing gas” can.)

“What we found was a suite of brine-rock reactions that generates a variety of products, including nitrous oxide and hydrogen,” said Joye. “In addition to Don Juan Pond, this novel mechanism may occur in other environments on Earth as well and could serve as both an important component of the Martian nitrogen cycle and a source of fuel [hydrogen] to support microbial chemosynthesis.” 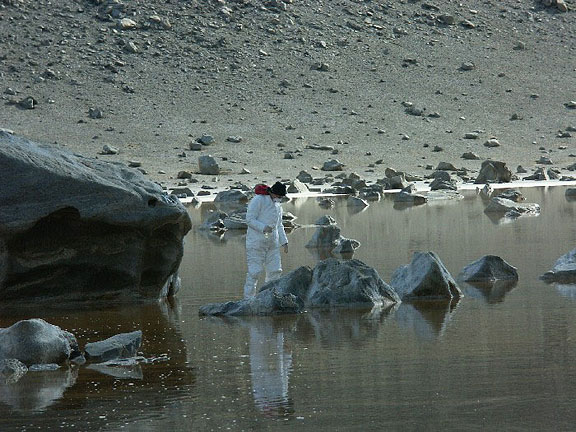 Researchers wore sterile suits and masks and used sterile instruments for sampling to avoid possible contamination of Don Juan Pond in Antarctica. They also collected the minimal amount of material necessary to achieve their research goals.

Even more interesting, perhaps, is that the results suggest that an additional mechanism–the reaction of brine-derived nitrates with basaltic rock–could be a “previously unrecognized means for mobilizing nitrate from the surface soils . . . and returning it to the Martian atmosphere as nitrous oxide,” Joye said.

The discovery of water has been the holy grail of numerous Mars missions over the years, and in 2009 the Mars Phoenix mission’s cameras photographed on the legs of the lander what appeared to be liquid water. If ultimately confirmed–and growing evidence appears to be solidifying in favor of such an analysis–it would be the first time liquid water was detected and photographed outside the Earth.

Working in such a beautiful but unearthly area presents stern challenges to researchers, Joye said.

“It’s a 40-minute helicopter ride over the McMurdo Sound just to get there,” she said. “Once in the Wright Valley, we enter a tight enclosure with steep, rocky cliffs on both sides, and between them is Don Juan Pond. I believe it must be one of the most beautiful places in Antarctica.”

“It has the kind of beauty that rock parks in Japan have,” he said, “except this is made by nature.”

Beauty aside, though, the team had to dress in sterile suits and masks and use sterile instruments for sampling to avoid possible contamination. They also collected the minimal amount of material necessary to achieve their research goals.

The discovery of the new mechanism opens numerous questions that must be studied, including the possibility that the process is taking place in other extreme Antarctic habitats or that it might contribute to nitrous oxide in temperate soils–a possible new clue to understanding greenhouse gases involved in global warming.

The most crucial result, however, may be in understanding how similar brine pools on Mars might work and whether they could support life.

Background on the work from the journal Nature Geoscience is available at this link: http://www.uga.edu/news/photos/DonJuanPond_backstory_NatureGeoscience.pdf

Note to editors: For a full copy of the paper, e-mail Joye at mjoye@uga.edu.