Remarks by the Vice President at Kennedy Space Center

By SpaceRef Editor
July 6, 2017
Filed under US, White House 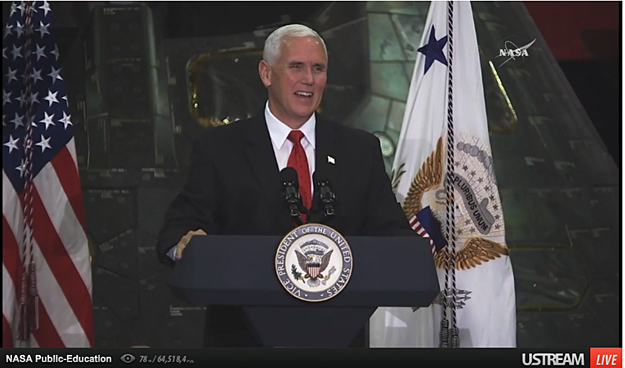 1:25 P.M. EDT THE VICE PRESIDENT:  Hello, Florida!  (Applause.)   Senator Rubio, Senator Nelson, Congressman Posey, Congressman DeSantis, Attorney General Bondi, Commissioner Putnam, acting Administrator Lightfoot, Director Cabana, all the leaders of industry and business who are gathered here today, Dr. Buzz Aldrin — (applause) — and all the great men and women of NASA and the Kennedy Space Center, it is my great honor to be with you here today at the dawn of a new era of space exploration in the United States of America.  (Applause.)  And I bring greetings from the man who is going to make that happen, his admiration for all of you gathered here and for America’s storied history in space is boundless; and he is committed each and every day to American leadership at home, around the world, and in the boundless expanse of space, the 45th President of the United States of America, President Donald Trump.  (Applause.)  In his Inaugural Address, the President rededicated our nation to once again lead in the heavens, and in his words “unlock the mysteries of space.”

For as the Psalmist teaches us, if we rise on the wings of the dawn, if we go up to the heavens, even there His hand will guide us, and His right hand will hold us fast. My friends, the future beckons — and so do the furthest depths of space.  Together, as one nation and one people, we will raise our eyes to gaze with wonder at the stars and once again renew our commitment to reach out our hands and touch the heavens. With confidence in all of you and with confidence in the strong vision and leadership of President Donald Trump, I know America will lead in space once again. Thank you.  God bless you and God bless the United States of America.  (Applause.)