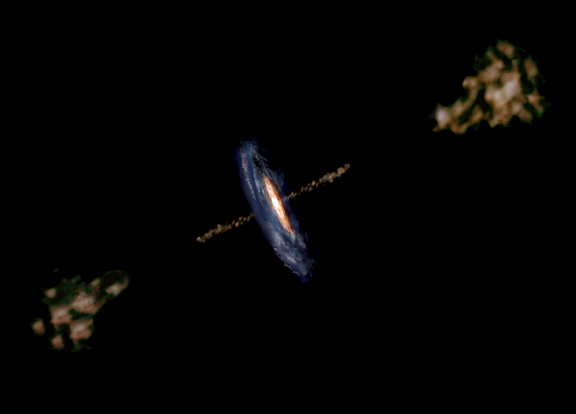 A team of researchers, mainly from Centro de Astrofisica da Universidade do Porto (CAUP), has detected a rare type of active galactic nuclei (AGNs), which have simultaneously characteristics of young and old AGNs. This apparent discrepancy is thought to be due to a recent re-ignition of the central black hole.

The team cross-correlated a catalogue of over 13 thousand clusters with a catalogue at radio frequencies, searching for a link between AGNs and the clusters in which they reside. CAUP astronomer and principal investigator, Mercedes Filho, commented on this chance discovery: “Our initial project aimed to study radio galaxies in clusters. By chance, we found eight radio sources with extended structure (radio jets and lobes) that didn’t show up in the optical images, which we found strange. So we decided to drop the initial project and pursue these strange radio galaxies.”

In order to get more information about these eight objects, further observations in the infrared were made with the VLT (ESO). This allowed the team to detect the host galaxies, where the extended radio structures originated from.

While comparing the obtained spectra with known galaxy models, the team was able to conclude that these eight sources are rare objects — galaxies with characteristics common to active AGNs (that still have jet emission) and inactive AGNs (where the jet emission has turned off). This (apparent) discrepancy can be explained with a relatively recent reactivation of the AGN, due to new material being accreted by the central black hole.

In general, when a black hole is active, it produces a jet along the galaxy’s rotation axis. This jet can travel great distances, creating lobes visible at radio frequencies. When the black hole is not active, the jet shuts down, but the lobes can persist for a very long time (a minimum of 1 million years).

The original jet emission must have been interrupted sometime in the past, while the lobes, though fading, remain visible in the radio. According to Mercedes Filho, “Our objects have radio lobes, a sign of past activity, but the spectra tell us that the central black hole and the jet have recently been reactivated.”

The black hole must have recently been replenished of new material (either through internal disk instabilities or interactions with other galaxies), which instigated a new jet emission, that started before the original radio lobes faded completely.

The team will now carry out a new set of observations, both in radio and gamma rays, to try and detect direct hints of young jets associated with the re-ignited central black hole.

The Centro de Astrofisica da Universidade do Porto (CAUP, http://www.astro.up.pt) is a private, non-profit, scientific and technical association, recognized as a public utility. It is the largest astronomy research institute in Portugal and since 2000 has been evaluated as Excellent by international panels, organized under the auspices of the national science foundation (FCT). Among its statutory objectives is the support and promotion of astronomy, through research, education at the graduate and undergraduate levels, science outreach and popularization of astronomy. The long-term research strategy of CAUP is the assembly of strong research teams on Origin and Evolution of Stars and Planets and Galaxies and Observational Cosmology.